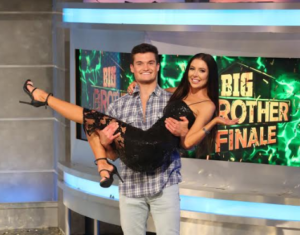 Sixteen house guests spend three months locked in a house under 24-7 camera surveillance and separated from the outside world; many viewers know this as the reality game show: Big Brother.

Season 21 just wrapped up two weeks ago and a young Tennessee man won and is now a little richer.

WBBJ 7 Eyewitness News Anchor Ariana Alexa sat down with Jackson Michie in Nashville. He also brought a surprise guest with him, Holly, the runner-up.

They are the first ever “showmance” to make it to final two of Big Brother.  The 24-year-old Franklin, Tennessee native walked away with the half a million dollar grand prize.  He is also a former University of Tennessee, Knoxville student. He is named after Jackson, Mississippi, but he has a love for the Hub City.

Millions of viewers watched as he won with a stone cold look on his face after receiving some backlash on the show.

“You know, being called a ‘racist’ on national television, keep the money. I care more about the name, my family, and people that are close to me than 500 grand,” says Michie.

And with that new chunk of cash, he plans to be responsible.

“I need to take care of some family things and the rest is getting saved and invested IRA, 401k, stocks, setting up myself for success in the future,” said Michie.

“It’s definitely not quite as much. It’s missing a zero,” Holly laughs, “I’m just going to relax for a minute, take a breather,
and not go back to work immediately.”

And what’s more important than the money? They say it’s their true love connection.

“I couldn’t have done this game without Holly’s support. She is more important than the money. I am 24 and I have plenty of living to do, but the feelings are not disgenuine,” says Michie.

A new competitive show could be in the couple’s future.

“I would do that in a heartbeat,” says Holly.