Preparing ahead of Tuesday’s wintry weather

JACKSON, Tenn. — In less than 24 hours, wintry weather is possible across the mid-south, and preparations are already underway. 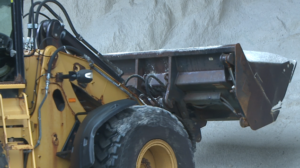 The Tennessee Department of Transportation is watching the forecast, and they have several thousand tons of salt on hand and ready to use.

“We’ll be monitoring the areas, watching for bridges and overpasses to freeze, and we’ll get out to treat those areas as quickly as possible,” Community Relations Officer for the Tennessee Department of Transportation Nichole Lawrence said. “We have three or four hundred people that will work at any given time during these events, and it’s typically all hands on deck.”

During our last winter weather event in November, only a few areas actually saw some measurable snow.

Several counties, including Madison, did end up closing schools, but mainly due to the bitter cold and patchy ice.

Although the Jackson-Madison County School Board has yet to make a decision on what to do for this upcoming weather event, they say that they are monitoring the weather closely, and that the safety of their students is of their utmost concern.

Rushing to stock up on the bread and milk probably isn’t needed, but the chance for wintry weather is always a good time to practice preparing, like making sure your tires are in good shape and having those shovels at hand.

Significant snowfall doesn’t happen very often here in West Tennessee. The last time we did see some major impacts from measurable snow in the area was back in January of 2018.

So, it is always good to stay updated with the current weather and what we can expect for tomorrow, until that snowfall forecast and its impacts are set in stone.

If there are any school closures announced, those schools will be listed on the WBBJ 7 Eyewitness News website and will scroll across the bottom of your screen as they are reported.