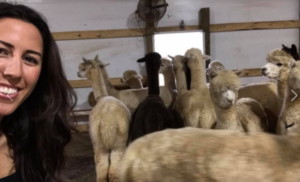 JACKS CREEK, Tenn.–Husband and wife Marcus and Stacey Skilldum had a change of heart with their life plans.

“You know, we said, eventually we were tired of doing the daily grind of working corporate jobs 24-7, 365  and we would just like to go off the grid, raise same alpacas and it became a family joke.  Then, we made it happen!” said Stacey Skilldum.

A family joke turned reality; They opened Mesa Trail Alpacas in Jacks Creek. It’s a place where everyone can get up close and personal with any of their 77 friendly alpacas and 4 llamas.

“You can tour the animals and you can pet them if they are agreeable. Education! If you want to know anything about alpacas, you’ll learn it, “said Stacey.

Even a chance to learn about different fibers.

“We have a Fiber Mill where we run the fiber into yarn and we take the yarn and make stuff, like scarves, mittens and toys,” said Stacey.

Families can book an alpaca tour by appointment for just $5. Mesa Trail Alpacas is located at 1295 State Route 22A S in Jacks Creek.