JACKSON, Tenn. — A mother is desperately trying to find her 21-year-old son who has been missing since September. 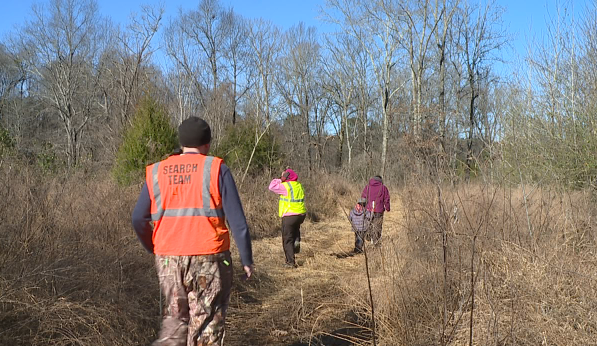 Brian McKenzie’s mother, Frances Gaines, says she is desperate for answers and will not stop until she gets answers on her son’s disappearance.

“We’re searching endlessly for my son and it’s becoming overwhelming to just search once or twice a week,” Gaines said. “I wish I could search every single day.”

“We’re going to be here until this is done,” said Rickey Alexander with Tennessee’s Missing and Unsolved. “We are working incredibly hard. Even when we are not searching, several of us are working behind the scenes with mapping out locations on Google Earth, talking with investigators, meeting with community members that might have information.”

One of the volunteers, Thomas Curry, says he can relate to Gaines after his son, Thomas Curry Jr., was shot and killed on Oct. 4, 2019.

Volunteers searched wooded areas around Campbell Street and other areas around Jackson in search for any clues that may lead to McKenzie’s whereabouts.

“I’ve tried touching base with the mayor, touching basis with the TBI, FBI, even Tennessee Equusearch and everyone needs approval from the Jackson Police Department. This is not because I am saying that the Jackson Police Department can not do their job. It is simply an asking point, help them, they are overwhelmed. I am trying to get my son help. There is help needed and if they would just open the doors to TBI, FBI,” Gaines said.

Volunteers ask if anyone has any information, please come forward.

“There are is so many ways. Crime Stoppers, Jackson Police Department, you can leave tips with the TBI, and they will get it with the Jackson Police Department,” Gaines said. “There are ways that you can remain completely anonymous where nobody ever knows who you are. We fully believe there are people, there is someone out there that knows something. Please come forward. You can do it anonymously.”

Gaines holds search parties every Wednesday and Sunday in hopes of finding any clues that may lead to her sons whereabouts.

If you have information on McKenzie’s whereabouts, call the Jackson Police Department at (731) 425-8400.