JACKSON, Tenn. — Earlier this month, the Old Country Store purchased items related to non-violent protests that took place in the Hub City during the struggle for Civil Rights. 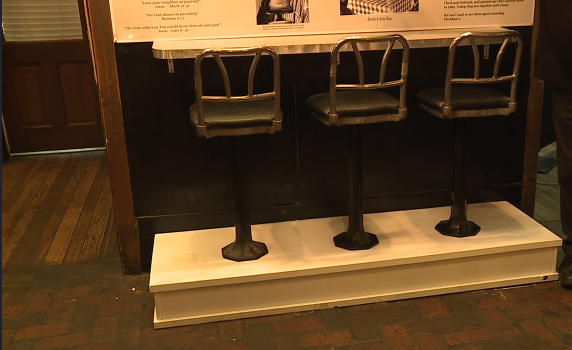 During the Civil Rights movement in the 1960s, African American students sparked a national movement of sit-ins at white’s only lunch counters in Greensboro, North Carolina.

These sit-ins began spreading across the South; Sit-ins that happened right here in downtown Jackson at a department store called Woolworth’s.

Five students from Lane College participated in these sit-ins.

On February 4, owners of the Old Country Store purchased the same stools used at Woolworth’s lunch counter to be preserved at their business.

Jackson City Councilman Ernest Brook’s father was one of the students who participated in the protest.

President of the NAACP at Lane College, Jovante Mahone says having this piece of history in Jackson is inspiring.

“This definitely encourages our chapter so very much. I was just over there thinking about this history and it’s just amazing,” Mahone said.

“The very first time that my father ever saw my mother was on one of these stools in 1947, in the Woolworth’s,” Clark Shaw said

And now every time someone sees these stools they’ll learn the many stories from those who were the pioneers of the Civil Rights movement.

Shaw bought more stools. He will be donating the others to Lane College, the Jackson-Madison County NAACP Chapter, the James Wolfe Music Academy and more areas in the Old Country Store.