Johnnie Black has been a bus 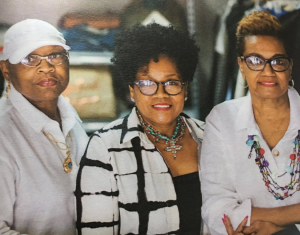 y bee for 40 years working at Wilbourn’s Sewing & Alterations in east Jackson. The business had its own humble beginnings.

“We opened up shop in back my mother’s driveway,” said Black.

Her mother, Elizabeth Wilbourn, was a single parent with 7 daughters and one son.

“Her dream was to start a business with her daughters,” said Black.

“It was devastating. She battled cancer for a year. I miss her. It’s hard working without her and mom,” said Black.

Without their mother, they still stitched their way to a fashion empire, even meeting celebrities like Shaq and Ray Charles.

“When I met Ray Charles, he felt my wrist. He knows girls are pretty by their wrists and he thinks I’m cute,” laughed Black.  “We’ve been sewing ever since and it continues to grow.
It gives me a wonderful feeling when I have satisfied a customer. They just love it and they make you feel so special,” said Black.

Their sister Ruth passed away 9 years ago. Two other sisters are still designing, one in Atlanta and one in Los Angeles.