CARROLL COUNTY, Tenn. — First responders were educated on how to rescue someone stranded in a common farm structure and got knee deep in grain bins to learn about rescue and recovery. 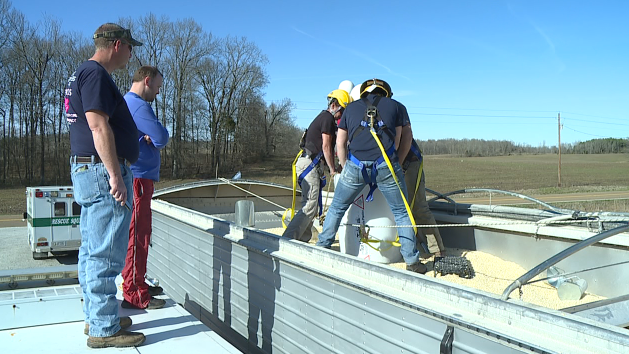 “We have the foundation of what we need to do, and know what to do, in case that problem arises,” Carroll County Fire Department district eight, Assistant Chief Daniel Thomas said.

Assistant Chief Thomas attended a unique training and organizers say it’s the first of its kind in Tennessee.

The Carroll County UT Extension, Tennessee AgrAbility, Renfroe Farms and more sponsored training on how to rescue someone stuck in a grain bin. It was organized by the Tennessee Association of Rescue Squads .

“I believe it will help come up with maybe less deaths in the farming industry, and make people more aware of their surroundings in this type of environment,” TARS state vice president, David Tuck said.

“We were letting them see the different types of tubes and grain rescue equipment that’s available,” Tuck said. “Carroll County will have some of this available to them in their county now, so we were getting them familiarized with what they’d be using.”

“There’s several different methods that you can use. They all involve trying to create a wall between the person and the rest of the grain that’s in the grain bin,” Carroll County UT Extension agriculture and natural resource agent, Kenny Herndon said.

Herndon explains how someone gets into an emergency situation in this farm structure.

“The first thing is going in without a safety harness. When you go in, you can have grain that has air pockets in it and you step on an air pocket and it pulls you under,” Herndon said.

“If somebody turns on the auger whenever you’re working in the grain bin, and it begins to move grain, as well as if you’re trying to get grain off the sides of the grain bin, that gets caked on, and that can fall on you and create an emergency situation,” Herndon said.

Organizers say they’re looking to build the course more and promote it across the state.

According to a Purdue University Report, there were 30 documented grain entrapment cases in 2018.

If your agency is interested in the class, contact the Tennessee Association of Rescue Squads and your area’s local agriculture office.