MADISON COUNTY, Tenn. — “The local and state elections actually have more of an impact on your daily life than the national one does,” said voter Jonathan Tidwell. 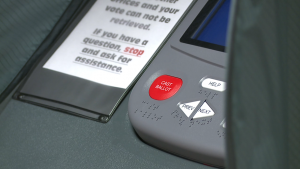 Thursday, residents made their way to the polls to make sure their voices were heard.

“This is a state primary so we have a Republican primary and a Democratic primary that is concerned with U.S. Senate, U.S. House of Representative and state representatives here in Madison County,” said Administrator of Elections for Madison County, Kim Buckley.

“We also have a county general election and that has some school board races,” said Buckley.

There are five Jackson-Madison County School board seats on the ballot this year, and voters say it’s important to show up when it comes to who will be leading our children.

“Most of these votes affect you directly so if you have a little child that’s going to school, your vote actually matters how the outcome of their education,” said voter Leelan Wilkins.

“If you don’t vote, you don’t have a say in what’s going on. You can’t really complain if you aren’t involved,” said Tidwell.