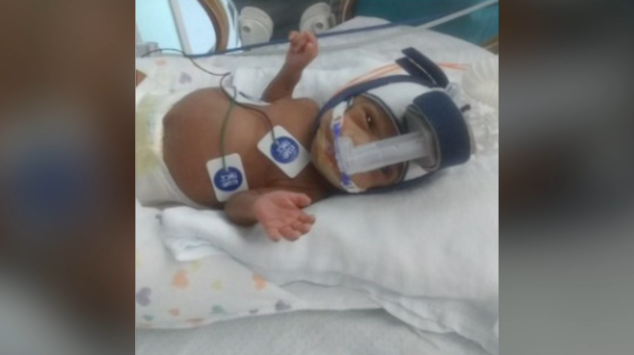 Her mom, Candace Dixon, says soon after her 24th week of pregnancy, she went for a check up.

“I noticed that my stomach had went down a little bit, and that she wasn’t moving as much,” Dixon said.

That’s when they realized something was wrong.

Doctors decided to do an emergency C-section at just 25 weeks to give the baby a chance to live.

Dr. Scott Guthrie is a part of the team helping keep Jakhiya alive because the NICU in Jackson is the only one between Memphis and Nashville.

“We take care of approximately 700 babies or so a year, and that’s anything from teeny-tiny babies like this, who weigh 13 ounces, to the big term babies who have problems from infections, injuries, things like that,” Dr. Guthrie said.

For babies like Jahkiya, what they need to survive is extensive and, for many families in West Tennessee, their closest and best option is Jackson.

“This little one was on a breathing machine for well over a month. We have to pay a lot of attention to their nutrition. Early on they’re getting nutrition through an IV bag,” Dr. Guthrie said.

He said these types of birth are exceedingly rare.

“Several years ago, we did have one that was exactly that small, that did survive, and at that time, it was the smallest baby in the state of Tennessee, to have survived,” Dr. Guthrie said.

How low are the chances for survival?

“An online calculator that is used by neonatal intensive care units throughout the U.S., but it doesn’t actually go to this weight. It stops at 400 grams, so we couldn’t even use one of our tools to estimate survival,” Dr. Guthrie said.

And now, 85 days after Jakhiya was born, she’s a month away from going home.

“It’s been a long, rocky road. I’ve shed a bunch of tears. Everything in this whole process,” Candace Dixon said.

Dixon reiterated that they’re not out of the woods yet.

But for now, they’re excited to welcome Jakhiya home for the first time.

The NICU at Jackson-Madison County General Hospital is currently undergoing renovations, which they expect to have completed by January 2021.