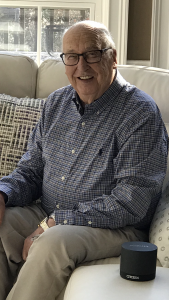 Billy was born July 24, 1930 in Gibson County, Tennessee, the son of George Franklin Couch and Minnie Gertrude Robinson Couch. He graduated from Milan High School in 1948 and served his country in the United States Army during the Korean Conflict. Billy was married April 18, 1954 to Joyce Ann McDaniel and he was a former resident of Memphis and Eads. He was employed as a federal bank examiner and was an independent banking consultant for many years before his retirement. He was a member of Bellevue Baptist Church in Cordova where he was an active member of his Sunday School class, “The Family of Friends” and R.O.M.E.O. Billy enjoyed writing and working in his yard.

The family requests that memorials be directed to the Ave Maria Home, 2805 Charles Bryan Road, Memphis, TN 38134 or by going to https://avemariahome.org/.