JACKSON, Tenn. — Hundreds of Jackson residents received donations thanks to a local church and business. 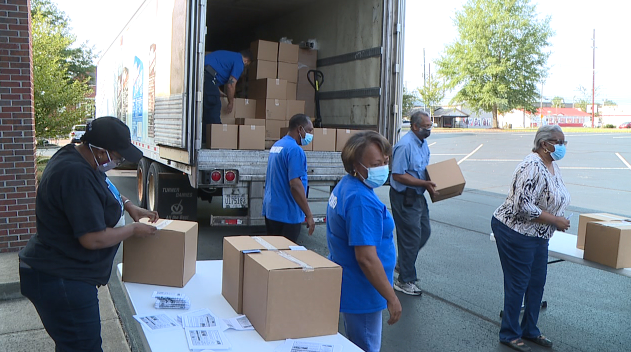 “Last week we gave 660 boxes away, and we have 660 boxes to give away today,” said Dr. Sam Jones, the family life minister at East Jackson Church of Christ.

Jones says he and deacon Joe Reeves helped set up the event after hearing about a similar program in Memphis.

The church opted to go with a more local business, Prairie Farms, who donated all the items.

“There have been a lot of people coming through and getting for people in their community,” Jones said. “Two percent milk, four containers of chocolate milk, cottage cheese, cream cheese, and a couple of other things.”

A few months ago, the church hosted a massive school supply giveaway.

Jones said Tuesday’s donation was a part of their continued efforts to support the community.

“The school giveaway was an excellent way for us to serve our community, this is an excellent opportunity. Right now, it is the spirit of giving,” Jones said.

“The thank yous and the gratitudes and those that want to hug but can’t hug,” church member Jackie Waller said. “It makes me feel absolutely great.”

Church members said the giveaways are also a way for them to reunite.

“We’ve been apart so long,” Waller said. “I feel great just being here.”

Reeves said the church members planned to continue the food drive until all the boxes had been picked up.

The church says this giveaway was spread by word of mouth. The next giveaway is expected to be fresh fruits.