JACKSON, Tenn. — For more than 20 years Cherie Parker has served as the public relations and marketing coordinator for Lifeline Blood Services in Jackson. 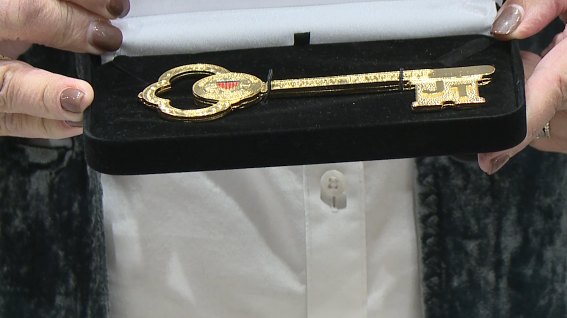 Parker recently announced her decision to retire from the blood donation center. Now the City of Jackson is recognizing her work in the community.

On Thursday, Jackson Mayor Scott Conger honored Parker with a key to the city and a proclamation in her name. Parker says her service to the community and the blood center is rewarding in many ways.

“Working with you guys, non-profit is the most rewarding, especially the blood center. A special thing for me, all the media support we have, especially the city and county and the leadership,” Parker said.

Parker is known for her bright spirit and the laughter she brings while working for Lifeline. She says working at the blood center was the best choice she made and receiving a key to the city will forever be special.

“Even though when I was younger, I thought Id’d go around the world and never come back. I’m so thankful that I got to and God has been good to me, and he used you all to bless me, and I thank you. Everybody in the community, they are so wonderful,” Parker said.

Many of Parker’s colleagues believe she has made a huge impact in the community and the legacy of her work will continue.