JACKSON, Tenn. — The Tennessee Department of Children’s Services needed help this year buying gifts for those in need this holiday season. 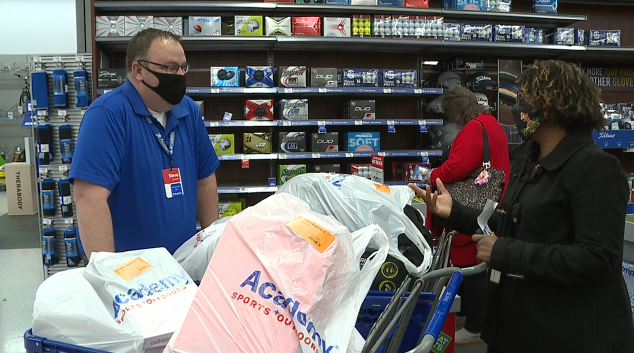 That’s when Lane College and Academy Sports & Outdoors teamed up to help save Christmas.

“In our partnership with Lane today, we donated $3,250, and it’s going to child services here in town,” said Steve Johnson, director of the Jackson Academy Sports & Outdoors store.

“This is a way to give some joy and to, hopefully, replace something they have missed over the past few months and give them something to look forward to,” said Dr. Kimberly Lebby, director of institutional research at Lane College.

A little over $1,000 of that was donated earlier this month, which DCS used to buy gifts. But Wednesday, there was an added bonus.

“We got to surprise them with an extra $2,000. I thought she was going to faint, it was pretty awesome,” Johnson said.

“I had no idea. I knew that we already have gifts that we were picking up today, but I had no idea we would be receiving the additional $2000,” said Courtney Carney, resource linkage coordinator for the Tennessee Department of Children’s Services.

Carney was almost in tears while describing how thankful the department is.

Anything from sports equipment to clothes and more will be given, and in a year like 2020, it’s the type of generosity they needed.

“Just knowing that these kids are going to have a great Christmas, whereas they may not have had a great Christmas before, you know it just warms your heart, and that’s what we’re here for,” Johnson said.

Both Lane College and Academy Sports & Outdoors thanked the Southern Intercollegiate Athletic Conference for helping to coordinate the donations.

Residents come together to celebrate their hometowns