JACKSON, Tenn. — While the snow caused many businesses to close, a few actually benefited from this week’s winter weather. 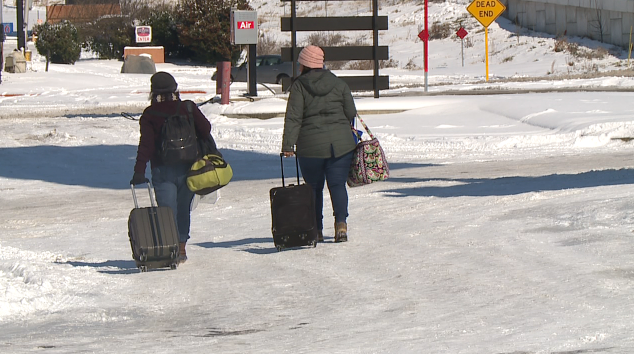 “I’ve been doing this since 2007, snow plowing,” said David Weissenfluh, owner of Green with Envy Lawn Care Services. “This is the first year I’ve had people call me about doing residences, and we’ve had a lot of snow before.”

Weissenfluh says his business boomed this past week during the winter storms. Days of plowing parking lots started at 6 a.m., and sometimes didn’t end until the early morning hours.

“It’s a lot of hours. If you’re in the business, you’ve got to be dedicated because the phone does not stop. I mean, for the last three or four days, it has been nonstop. My voicemail box was full and it’s never been full because I always answer and take them off. That’s how many voicemails I have,” Weissenfluh said.

Weissenfluh says he and his son worked 70 hours over the course of three or four days to help businesses reopen.

But plowing companies weren’t the only ones that had some help from the snow. Hotels in the area also saw an increase in guests.

“Most of the people who came here, they got a room here because they can’t drive their car, a house pipe or their heater was not working,” said Bhavin Batel, owner and manager of the Days Inn. “That’s why they came here, even though it was hard to get it here.”

The Days Inn had a full parking lot Friday morning due to guests needing amenities the hotels offered.

Those businesses have recently been hit hard by the pandemic, and the snow brought a boost for business.

Due to icy roads, travel was slow this week, reducing the amount of visitors, but people who needed a warm place to stay did help the hospitality industry.

Weissenfluh says the only issue his business might face after this week’s snow is lawn care, due to services being pushed back for weather. He says the snow and ice might put a strain on lawns this summer.