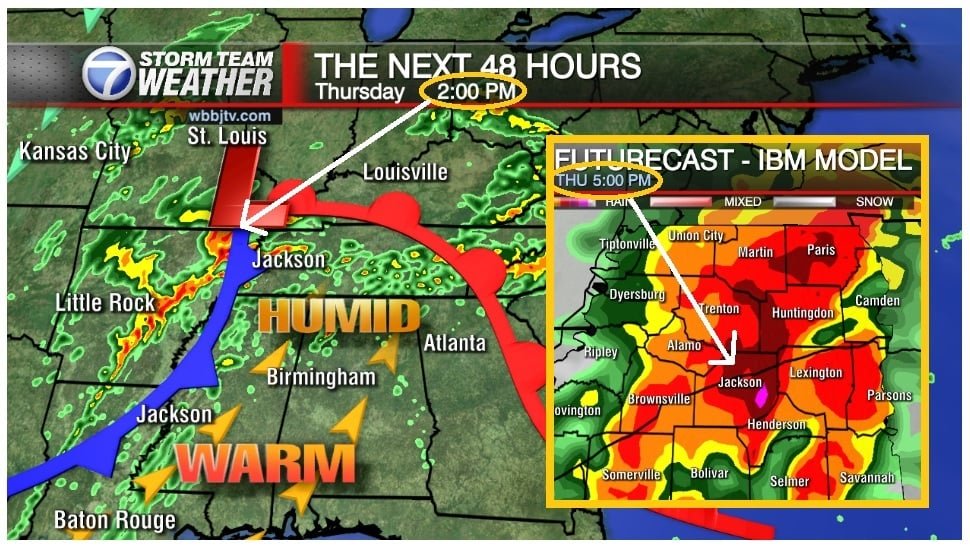 Our 2nd significant storm threat this season will be here on Thursday. An enhanced risk of severe weather (3/5) has already been issued 3 days out for West Tennessee. This storm system is eerily similar to last weeks storm that spawned 20 tornadoes in Alabama. Forecast models have this system tracking a little further north then last weeks. This could increase the tornado threat this go around for us. The timing of the tornado threat appears to be between 2-7 PM for our area. We will keep monitoring the forecast models are we get them in the Storm Team Weather Center and will bring you the latest details right here.

Expect mostly cloudy skies and eventually decreasing clouds and mostly dry conditions as the night goes on but most of us will not see much or anything. It will remain breezy at times and overnight lows will stay warm in the mid 50s.

The first half of the day looks really nice. Expect mostly sunny skies in the morning and highs to reach the mid 70s by the afternoon. Winds will be light for the most part out of the south. Showers and storms could return overnight into Thursday morning.

Rain showers and some weaker non severe storms are expected for the first part of the day. Expect cloudy to mostly cloudy skies all day. Winds will be breezy at times and come out of the south. Highs should reach the low 70s in the afternoon. Some stronger storms and possibly some severe weather could show up Thursday during the afternoon and evening time frame. The timing, location and strength of these storms is evolving and we hope to have a better idea as the system gets closer. But an enhanced risk of severe weather has already been issued by the National Weather Service Storm Prediction Center for our region.  This is a significant threat and you need to stay weather aware and watch the forecast closely over the next few days.

Here is a look at the expected timing of the storms on Thursday as of Tuesday afternoon forecast model runs.

Flash flooding could become an issue in some areas south of I-40 as well so we will be keeping a close eye on that situation as well. 2-4″ of rain will be possible in some areas that are hit with multiple storms on Thursday.

Friday will be a bit cooler behind the cold front and highs will make it into the mid to upper 60s. But we should see plenty of sunshine and the winds are expected to come out of the west. It should be a dry finish to the work week and start to our weekend.

Showers are possible Saturday night into Sunday morning according to some of the forecast models. We should see plenty of sunshine as well at times this weekend. Highs will climb into the mid 70s on Saturday but should be about 10° cooler on Sunday behind Saturday nights storm system. Thunderstorms could be possible as the system tracks across West Tennessee but it is too early to tell or have high confidence in the forecast as of now.

We are now officially in Spring and starting to get closer to our peak severe weather season. So you need to stay weather aware to changing weather patterns and monitor the forecasts closely. We got you covered in the WBBJ 7 Storm Team Weather Center as always.