“I’ve been through an awful lot whether it be ground zero, whether it be Plainfield tornadoes just heartbreaking situations,” said long time volunteer Curtis Reichhold. 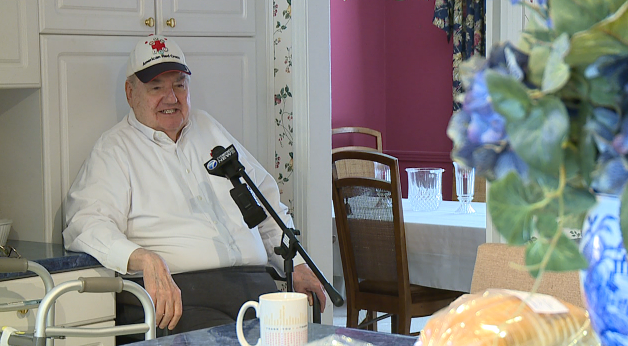 78-year-old Reichhold has been volunteering across the country for nearly 40 years.
From the American Red Cross to the Southern Baptist Convention disaster relief, Reichhold says he has met people on some of the worst days of their lives.

“Sometimes you got there a little too early… ok.  You have to separate yourself from what’s happening and help the people,” Reichhold shared.

Locally, he volunteers at the RIFA soup kitchen and Area Relief Ministries’ Room at the Inn.
Reichhold says the motivation to help others started while going through a personal tragedy.

“In the early 1980s my wife was in an auto accident. She lost control of the car, slid into a tree on black ice. It took them 45 minutes to cut the car apart,” Reichhold shared.

With multiple injuries including a broken neck, he says the doctors only gave his wife a 50 percent chance to survive.
A week later he found out his mother had a brain tumor.

“The good Lord and I had some discussions, and I was praying. I said, ‘Lord I’ll tell you what, bring my wife and my mother through and I’ll do something to help other people.’ I think I kept my end of the bargain and I think the good lord kept his end of the bargain because he brought them both through,” Reichhold said.

It may have started with a promise, but Curtis says it’s the feeling of giving back that keeps him going.

“You can’t believe what kind of feeling you get when you go and give somebody a cup of water or a hot meal out of the emergency vehicle for the Red Cross, and they walk up and they’re crying. They’ve got nothing,” Reichhold explained.

He says he doesn’t plan to stop helping a neighbor in need any time soon.

You can nominate someone for the Multiplying Good Award here.

Chamber officials discusses how to grow the City of Jackson