JACKSON, Tenn. — The Jackson City Council met for the first meeting of the new fiscal year. 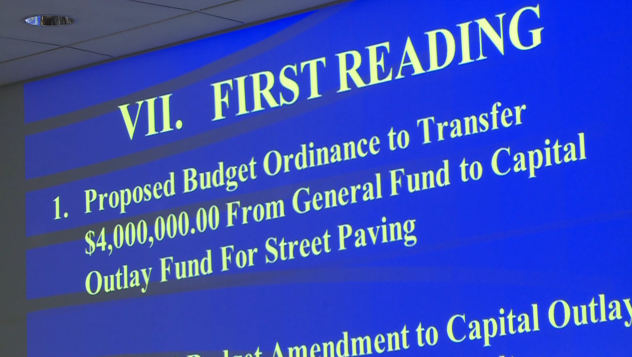 During the meeting, Jackson City Council members discussed a variety of items, but the big topic was a budget transfer of $4 million for street paving.

“This is a big plan. It’s coming later than we’d like to see it. This is happening in July, when typically these types of plans will be put together in February or March, so with that, there’s a crunch timeline and that’s been a concern of mine is, can we achieve the goal? I don’t want to tell the public that we can do something if we can’t achieve it,” said councilman Paul Taylor.

Council members have asked for more clarification. They’re requesting the engineering department gather bids on the pavement plan, and want to coordinate where the greatest need is to make sure the project can be done.

“We’ve asked for the city engineer, as well as an accountability piece, to come back to report to us on a monthly basis on the progress that we’re taking with these streets,” Taylor said.

The goal is to finish 25 percent of the project. In 2019, the project was about 22 percent finished, but COVID-19 caused a year-long pause on the project, leaving more than $1.5 million.

Council members have not decided what specific streets will be included in the plan, but they say this is one of the top to-do list items.

“We’re very excited, optimistic about moving forward with the shelter. We know this has been a need in our community for a long time and we’re glad to support,” said Lauren Kirk, director of performance management.

The city already has a property in mind. Kirk says the next step is to have the property inspected, go about buying it, and go into the design and development phase to get the property ready for bidding.

The property could take up to a year before being completely finished.

“As we all know, construction timelines right now are a little slow and materials are high. It would be our hope to move in there by winter, but I wanted to be safe and projected a spring opening timeline just give us some crunch, and if we move forward faster, that’s great,” Kirk said.

Kirk says with the Carl Perkins Civic Center now open for public events, there will not be a warming shelter for men there in the winter, but area providers are looking at other options.