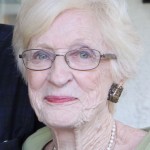 Nell Eugenia Dossett Matthews passed away peacefully on November 15, 2021.  Mrs. Matthews, known affectionately by scores of Fayette County residents, children, former children and students as “Miss Genie” had a gentle way of inspiring those whose lives she touched, to identify and cultivate the best qualities within themselves and to utilize those assets as a force for the greater good. Angels do walk this earth with the purpose of blessing those in pain with comfort and solace and that was her charge, one well performed. Upon her passing, Fayette County loses an energetic and tireless community advocate and the proverbial “underdog” loses its greatest and fiercest cheerleader. Hers was a life very well-lived and this world is a better place for Miss Genie having graced it.

She was born and spent her adolescent years in Jacksboro, Tennessee before moving to Nashville and later Johnson City. Genie was the fourth child of Nell and Burgin Dossett. She spent one very lively (if not an exactly academically stellar) year at the University of Tennessee where she met her future husband of more than 62 years, John Payson Matthews. She returned home and enrolled in East Tennessee State University where she ultimately graduated with honors and also earned her Master’s of Education degree. Genie always vehemently denied that her academic success at ETSU had anything whatsoever to do with the fact that her father was President of the institution at the time!

While her husband was enrolled in law school at UT, she supported the young couple by teaching by day at the newly-formed Webb School of Knoxville while spending her evenings experimenting with dozens of different tuna fish recipes because “tuna was $0.13 per can.” Several decades later her husband casually mentioned that he had always hated tuna fish. Therein lies a couple of reasons that a marriage can survive more than six decades.

In 1959, Payson and Genie Matthews moved to Somerville where she became actively involved in numerous community projects. Genie was an “influencer” long before the term was adopted. She was one of the founders of Fayette Academy and later organized and taught the Kindergarten program. She organized the Fayette County Sesquicentennial Celebration and volunteered as a mentor at Wilder Youth Development Center.

Realizing in the early 1980’s that she was running low on crises in her own life, she volunteered to man the night phones at The Crisis Center’s Suicide Hot-Line. One of her callers once told her, “Ma’am if you will just stop talking I promise I will not kill myself.” In all seriousness, Miss Genie was drawn to those who were hurting and eased their pain.

Her house was always beautiful and gracious and was featured on tours with regularity as was her garden. She found and appreciated beauty everywhere – in driftwood, tree roots, old metal, fall leaves – she saw unique expressions and opened others’ eyes to them with great joy. Her talent for design – interior, landscape, table and attire – was recognized widely and sought by many. For her, that talent came naturally and her joy in sharing or creating beauty for others was endless.

The young people in her life – family and friends alike from every decade and origin – were always enthralled by her stories and her ability to encourage them to use their imaginations to explore unknown places and make play objects out of a variety of materials.

You didn’t need eyesight to know that Genie was present – her spirit filled a room immediately and her presence was large.

To say that Genie lived life fully is a modest statement – she was “all in” – whether cheering for her children or grandchildren, teaching vulnerable children to read, sharing her incredible design eye, deepening her spirituality, supporting and loving friends and family in abundance, connecting with nature in every form, but especially the mountains of east Tennessee. Genie was a giver, a full participant who always looked outward to connect with others and made their lives much richer as a result.

Miss Genie is survived by three children: John Payson Matthews IV, Blakeley Dossett Matthews and Thomas Burgin Jennings Matthews along with three grandsons and four granddaughters. Additionally, her surviving sisters are Julia Webb of Knoxville and Ann Blevins of Franklin along with nine nieces and nephews. Her devoted husband predeceased her in 2018.

In lieu of flowers, the family requests that donations go to the First Presbyterian Church of Somerville where she was an active member for more than 60 years or to the charity of your choice.