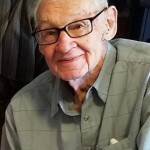 John was born August 27, 1934 in Collierville, Tennessee, the son of the late Lee and Bertha Duffy Keough. He served his country in the United States Air Force during the Korean Conflict and was employed as a maintenance mechanic for Defense Depot in Memphis. He was married May 25, 1957 to the former Margaret Yvonne Wright and a member of Midway Baptist Church in Whiteville. John loved fishing and enjoyed fixing things. He was a ”jack of all trades and master of none.”

In addition to his parents, he was preceded in death by his sisters, Judy Beaty, Carolyn Darnell and Dorothy Sandidge; and his brothers, Roy Keough and Charles Keough.