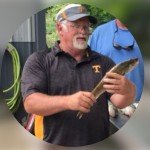 Stevie was born March 20, 1956 in Somerville, Tennessee, the son of the late William Jeff Lipford and Ollie Mae Cannon Lipford. He served his country in the Tennessee Army National Guard and was employed as a first mate on the river barge. He was married January 21, 1987 to the former Teresa Leatherwood and was a member of Forty-Five Baptist Church in Moscow. Stevie was a member of the Chickasaw Country Club and was an avid golfer. He enjoyed racing cars, fishing and Tennessee Vols football.

In addition to his parents, he was preceded in death by his brother, William Wesley Lipford.