JACKSON, Tenn. — West Tennessee counties and cities are preparing for snowfall in the upcoming days. 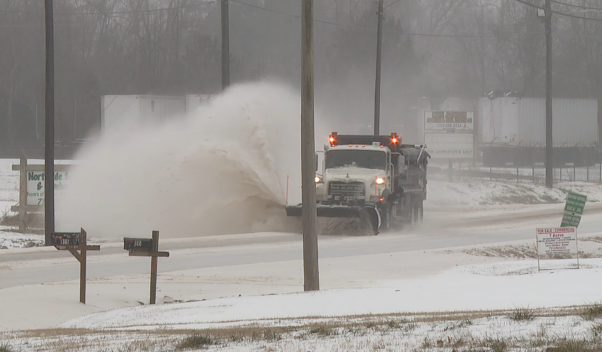 “If you don’t have to be out, don’t be out,” Weddle said. “If you are out just give those workers, drivers, you know, give them a little respect because we we trying something a little different.”

This year they are changing the routes and splitting up into five districts. Between the five plow trucks, main roads including Highland, Old Hickory, and Vann Drive, along with hospital and first responder parking lots will be salted and plowed before the trucks follow their routes.

“I like to have a crew out, three hours before snowfall to kind of pre-salt all overhead bridges and underpasses,” said Weddle. “Then we come back and then plow, hopefully that salt will kind of break some of the ice and that makes it a lot easier for the for the big push.”

If you are having your own parking lot plowed, Weddle asks that you do not push the ice back into the main streets.

Hardin County Mayor Kevin Davis says their crews are on standby and will continue to receive guidance from the National Weather Service.

And Crockett County Mayor Gary Reasons says they are preparing their response crews as well.

We also reached out to Madison and Carroll County for their plans with the incoming snowfall, but have not received a response at this time.

Stay up to date with the latest forecast with The WBBJ Weather app, available on iTunes and in the Google Play Store.