JACKSON, Miss. (AP) — A cold snap blanketing the Deep South has upended water systems as local officials struggle to repair widespread leaks and broken pipes. Breakdowns in infrastructure arose in rapid succession after days of freezing temperatures in areas where extended periods of frigid weather is abnormal. Officials have encouraged people across the South to drip faucets during the prolonged cold snap because water moving through pipes is less likely to freeze. Localities across the region have issued boil water advisories and are distributing bottled water for basic needs. The water woes are acute in places with already troubled water systems like Jackson, Mississippi, where some people have been without running water for days. 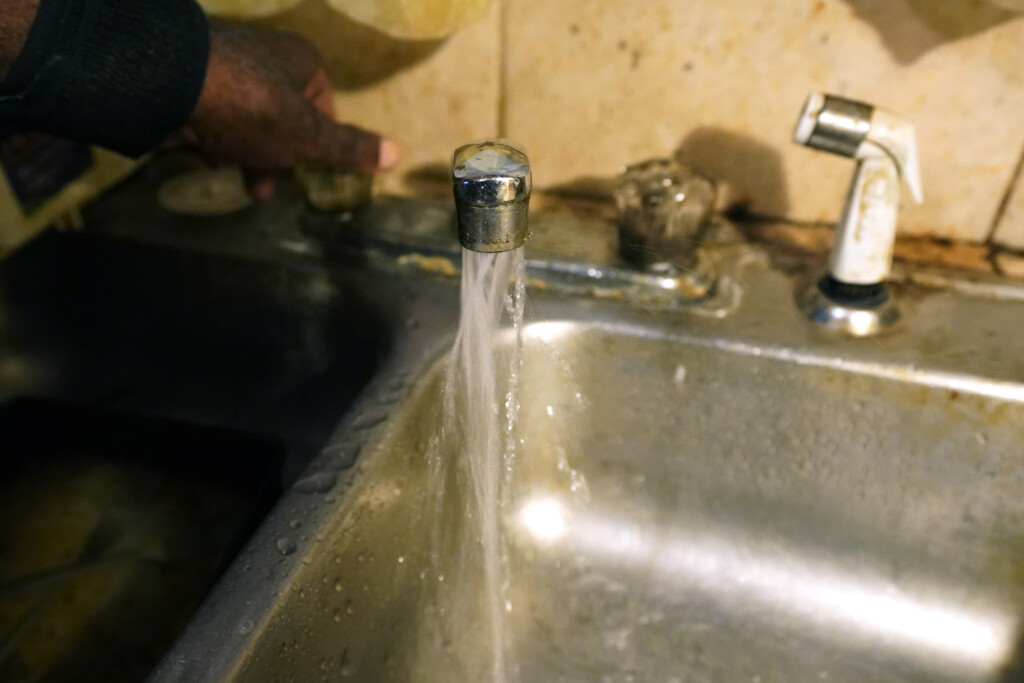 FILE – Although the water now flows “just fine” from Charles McCaskill’s south Jackson, Miss., home on Sept. 7, 2022, he says he still will not drink it, noting the then-state-issued, boiled-water notice. A cold snap blanketing the Deep South has upended water systems as local officials struggle to repair widespread leaks and broken pipes, forcing some people to take drastic measures to get by without reliable access to running water. The water woes are acute in places with already troubled water systems like Jackson, Miss., where some people have been without running water for days. (AP Photo/Rogelio V. Solis, File)

JACKSON, Miss. (AP) — A cold snap blanketing the Deep South has upended water systems as local officials struggle to repair widespread leaks and broken pipes, forcing some people to take drastic measures to get by without reliable access to running water.

Breakdowns in infrastructure arose in rapid succession after days of freezing temperatures in areas where extended periods of frigid weather are abnormal.

The water woes are acute in places like Jackson, Mississippi, where the water system partially collapsed in late August and has had repeated weather-related breakdowns. Jackson Mayor Chokwe Antar Lumumba said the city is dealing with a “worst case scenario” on Tuesday.

“We are dealing with an old, crumbling system that continues to offer challenge after challenge,” he said.

Tekemia Bennett said she hasn’t had any water since Friday. She and her four children woke up with no water on Christmas day.

“Christmas was very much like the Grinch came and stole it. I could not cook for my children. It was more like we were in survival mode,” Bennett said.

People flocked to water distribution sites set up by the city, but the lines were “as long as the eye could see,” Bennett said. She got on line two days in a row before eventually giving up.

Flushing a toilet without any pressure requires large quantities of water, a hot commodity in Jackson. So she began to cover her toilet bowl with plastics bags and trash can liners.

“We are actually defecating in bags and tying them up and throwing them in the trash,” Bennett said.

Throughout the Deep South, hundreds of leaks from broken pipes were draining water towers faster than treatment plants could replenish them.

Selma, Alabama, was in the third day of trying to find leaks and started Monday to shut down major lines and interrupting service to try to isolate where the biggest leaks were happening, Mayor James Perkins Jr. said in a statement.

Water crews in Florence, South Carolina, finally succeeded Tuesday in getting the water pressure back up after having to follow just about every water line in the city to find a large, but hidden, leak, officials said.

Officials on Monday began distributing water in Clayton County, a suburb just south of Atlanta, after burst pipes caused many customers to lose water on Sunday.

“It’s not a great feeling, and we are sad because on Christmas, I woke up to make tamales and realized we had no water,” Maria Landeros, a 30-year-resident of Forest Park, told WXIA-TV in Spanish.

Bottled water was being distributed Tuesday in Memphis, Tennessee, where authorities urged people “to limit all non-essential water uses.” An NBA game went on as planned Tuesday night in the city, though the water issues meant only canned or bottled drinks were available.

Up to 15% of Memphis Light, Gas and Water water customers are without water in Shelby County, the most populous county in Tennessee, because of inadequate water pressure. “Most of the cause of that lack of pressure are the water leaks in privately owned buildings, particularly from fire-suppression equipment,” Memphis Mayor Jim Strickland said.

The utility said late Monday that leaks had been found in more than 2,400 leaks in private facilities, including 45 broken commercial sprinkler systems.

The water issues started on Dec. 24 when the utility said it experienced multiple line breaks because of freezing weather and power outages. The breaks resulted in a significant loss of pressure to the drinking water system.

The publicly owned utility, which serves more than 440,000 customers in Memphis and Shelby County, ordered an emergency drought management plan on Monday, barring non-essential water uses such as washing cars while the utility works to find, fix or isolate main breaks and broken water services.

Memphis Light, Gas and Water CEO Doug McGowen said in a statement Tuesday that “we are heading in the right direction to recover from this water distribution crisis,” with pressure being restored, but urging continued conservation for now. He said 31 water main breaks had been repaired, with work continuing on eight more. After asking businesses to let workers stay home Tuesday, McGowen said they could return to normal operation Wednesday.

In Kentucky, the Meade County Water District asked its 5,000 customers to conserve water. But then it said in a statement that because of the cold temperatures and increased demand, it was unable to keep up and would temporarily cut off service to some areas so that tanks could refill.

Parts of Asheville, North Carolina, were experiencing water outages or were advised to boil water. The city said Tuesday afternoon that a water production facility in the southern part of the city has been unable to produce water since Dec. 24, and the problem has been exacerbated by line breaks because of extremely cold temperatures.

The city said in a news release late Tuesday that it anticipated the water facility to produce water at reduced capacity on Wednesday. Those without water, however, shouldn’t expect to receive it for another 24 to 48 hours, according to the news release.

Officials encouraged people across the South to drip faucets during the prolonged cold snap because water moving through pipes is less likely to freeze. But as soon as the temperature rose above 32 degrees Fahrenheit (0 Celsius), they said people need to stop the drip. That thaw also means frozen, broken pipes will suddenly begin leaking.

Water expands when it freezes, bursting pipes that aren’t protected. Then when the temperature rises, those broken pipes start leaking hundreds or thousands of gallons of water.

In Sun Belt cities like Jackson, water systems aren’t standing up the tumultuous weather. Tens of thousands of Jackson residents in the Mississippi capital were also left without running water for days during a cold snap in 2021, only for the water system to fail again in late August.

Jackson’s water system is set to receive $600 million from the federal government after it was included in the $1.7 trillion spending package passed by Congress last week. But Bennett vowed that she won’t be living in the city this time next year.