At the Supreme Court, it’s taking longer to hear cases

WASHINGTON (AP) — Supreme Court arguments are continuing long after a red light tells lawyers to stop. Arguments that usually lasted an hour have stretched beyond two this term so on many days it’s well past lunchtime before the court breaks. The lengthy arguments have to do with a change the justices made to their argument style tied to the coronavirus pandemic, leading to the justices asking more questions. Justices have said in the past it’s lawyers’ written briefs, not oral arguments, that most influence their decisions. So it’s unclear if the extra time is really helping them decide cases. 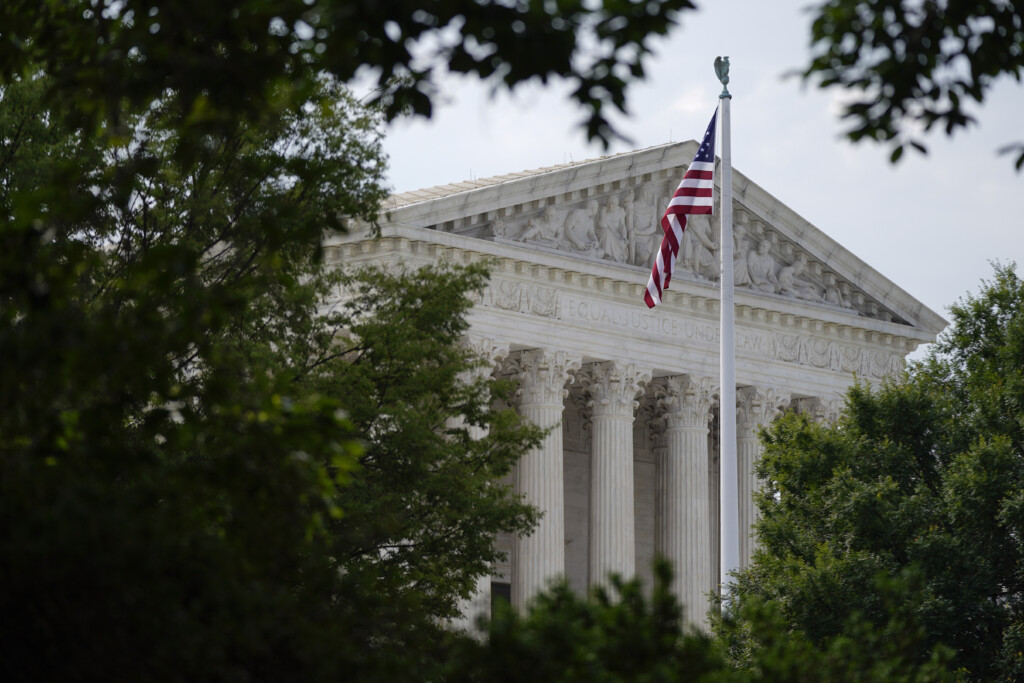 FILE – An American flag waves in front of the U.S. Supreme Court building in Washington, June 27, 2022. Supreme Court arguments are continuing long after a red light tells lawyers to stop. Arguments that usually lasted an hour have stretched beyond two this term so on many days it is well past lunchtime before the court breaks. (AP Photo/Patrick Semansky, File)

WASHINGTON (AP) — When lawyers argue before the Supreme Court, a small white light goes on to tell them when their time is almost expired and then a red light signals when they should stop. But arguments this term are extending well beyond the red light’s cue.

Arguments that usually lasted an hour in the morning have stretched well beyond two, and on many days it’s long past lunchtime before the court breaks.

The lengthy arguments have to do with a change the justices have made to their argument style, a switch tied to the coronavirus pandemic, leading to the justices asking more questions. Justices have said in the past that lawyers’ written briefs, not oral arguments, most influence their decisions, so it’s unclear if the extra time is really helping them decide cases. Whether that trend will continue is also an open question.

In December, an argument about whether a Colorado graphic artist can refuse to create wedding websites for same-sex couples lasted two hours and 25 minutes. And an important elections case that was scheduled for an hour and a half clocked in at two hours and 53 minutes. Already, a handful of arguments have been longer than any argument the high court heard in the term that ended in June — and that term included major cases on abortion and guns.

In the graphic artist case on Dec. 5, Justice Neil Gorsuch engaged in friendly banter with attorneys about the length of arguments.

“Good morning, Mr. Olson,” Gorsuch said around 11:30 a.m., after arguments had been going on for nearly an hour and a half.

“Just barely,” Gorsuch replied to laughter from the audience. “It must not feel like it standing where you are.”

The reason high court arguments are running longer goes back to a change the justices made in 2020. After the pandemic began, the justices decided to hold arguments by telephone and abandoned their typical free-for-all style of questioning. Instead, each justice got a few minutes to ask questions in order of seniority.

When the justices moved back to in-person arguments in their courtroom more than a year and a half later, they returned to the largely free-for-all questioning. Now, however, at the end of each lawyer’s time, the justices each get a chance to ask any remaining questions, again in seniority order. That switch led to an average of 18 extra minutes per case last term, said lawyer William Jay, who’s been tracking the extra time.

Jay said by email the longest argument so far this term was a case involving the adoption of Native American children, which ran three hours and 13 minutes. Jay said his sense is that the justices seem more comfortable with the format this term and that the questions are longer. Justice Ketanji Brown Jackson, who replaced retiring Justice Stephen Breyer, is also a “considerably more active questioner” than her predecessor, Jay said.

According to Adam Feldman, the creator of the Empirical SCOTUS blog, Jackson has spoken about 36,000 words this term while her most vocal colleague, Justice Elena Kagan, has spoken only about 24,000.

The justices’ new format has tripped up some lawyers who are used to the old way of doing business and have moved to sit down when the red light on their podium went on.

Longer arguments are, in fact, a return for the court. Early in the court’s history, cases could take days to argue.

During the 1800s, when the justices heard arguments from noon to 4 p.m. without a lunch break, tables were set up behind the bench and the justices would leave one or two at a time to eat.

“The audience could not see them eating, but they could very distinctly hear the rattle of the knives and forks,” court history expert Clare Cushman has written.

The length of arguments shrank over the years until in 1970, under Chief Justice Warren Burger, it became 30 minutes per side. The court’s website claims that’s still the case. “Typically, the Court holds two arguments each day beginning at 10:00 a.m., each lasting one hour,” it says.

These days there’s no leaving the bench to eat during arguments, though justices sometimes duck out to go to the bathroom. In October, when the court heard back-to-back arguments in two affirmative action cases, it took a brief break between cases. The court had scheduled two hours and 40 minutes of arguments in the two cases. They took nearly five hours.

That’s compared with an hour and 27 minutes for Bush v. Gore in 2001. In 2012, arguments over President Barack Obama’s health care law stretched for approximately six and a half hours over three days.

Chief Justice William Rehnquist, who was chief from 1986 to 2005, was known for cutting off lawyers and even fellow justices when the lawyer’s red light went on.

Seth Waxman, a veteran of more than 80 Supreme Court arguments, once remarked that for Rehnquist: “The red light ended everything — absolutely everything.”

Roberts, who became chief after Rehnquist’s death, is less strict, but before the pandemic, arguments were still generally an hour.

In the graphic designer case, after the third and final lawyer stood up to argue, Gorsuch couldn’t resist revisiting the argument’s length.

“I think, at the end of two hours — we are now in the afternoon, by the way,” Gorsuch told Biden administration attorney Brian Fletcher.

It was only the first of two cases scheduled for the day.