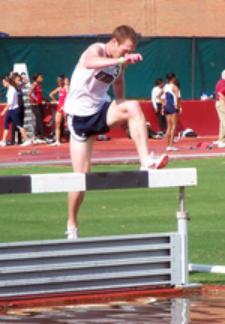 When it comes to events in track and field some things that may come to mind may be the shot put, long jump, pole vault and relays. One that slips through is the Steeplechase, which is an obstacles race. And no one does it better than UT Martin Senior Allen Thurman. This past week Thurman shattered the school record at the Alabama Relays. “I just had a lot of great training in the off season,” Thurman said. “Over the winter I put in a lot of good miles and it’s helped as I have begun the season.” Thurman has all but mastered the Steeplechase. In fact, the record that he broke this week was his own. But none of this would have happened if it was not for his coach. “We had a meet in Georgia and he came up to me 10 minutes before the event and said I was doing the Steeplechase,” Thurman said. “I had never jumped over a hurdle or barrier and I was like OK I’ll do it.” That was two years ago at UT Chattanooga. The Steeplechase is no easy event. You jump over hurdles that do not move and there is even a water jump thrown into the mix. “You jump over one and you think it’s over,” Thurman said. “Then you look up and there’s another. You have 5 per lap and it’s just overall a huge challenge.” Breaking the school record in the event does not surprise Skyhawks head coach Gordon Sanders. “Allen’s a racer and goes for the win rather than time,” Sanders said. “In this case he has such a lead he was able to pace himself. I think if the competition had been tougher he would’ve had a faster time.” “I knew what the record was,” Thurman said. “I was actually going for a faster time. I wasn’t satisfied with it but the win is always great and breaking the school record is too.” Thurman will compete in the Steeplechase one more time this year and says once again he will try to break his own record.