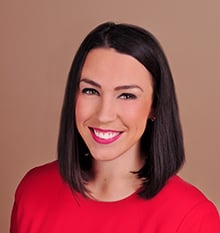 Katie Shambo joined the WBBJ 7 Eyewitness News Team in August 2014. Katie was born and raised in southern New Hampshire and comes to WBBJ from Boston where she attended Suffolk University and graduated magna cum laude with a B.S. in broadcast journalism. Before arriving in West Tennessee, Katie worked as a writer for the NBC affiliate WHDH in Boston. She also worked as a newsroom intern at the ABC affiliate WMUR in Manchester, N.H., and as a sports intern at WHDH. While at Suffolk, Katie was part of the award-winning newscast “Suffolk U News” where she reported on topics including South Boston’s controversial St. Patrick’s Day Parade and the Boston Marathon one year after the bombings. Katie was also involved in Suffolk’s leadership program and hip-hop dance team. She loves to travel and was able to study for a semester at Suffolk’s campus in Madrid, Spain, and return overseas for an honors spring study tour of Prague, Czech Republic. In her free time Katie enjoys yoga, running, coffee, volunteering, cheering for Tom Brady and the New England Patriots and consignment shopping (she loves a good thrift find). Katie is also a Young Faces of ALS ambassador for the ALS TDI in Cambridge, Mass., and helps to raise money and awareness in hopes to one day see a cure for Lou Gehrig’s Disease. Katie always knew she wanted to venture out of New England for her first reporting job and is “wicked” excited to learn about West Tennessee and help tell its stories. If you want to say hi or have a story idea you want to share with Katie, email her at kshambo@wbbjtv.com or follow her on Twitter @wbbj7katie.