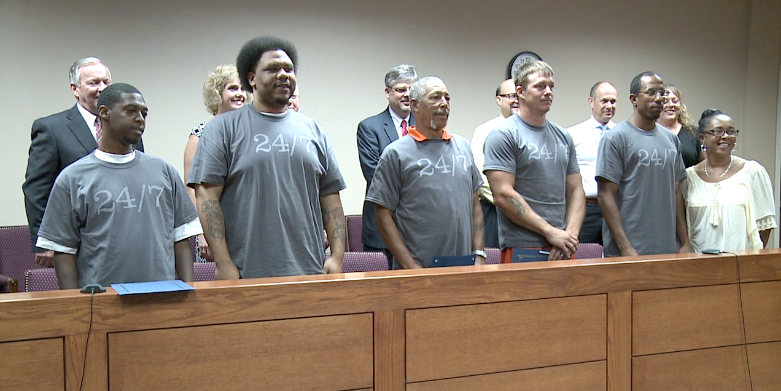 SELMER, Tenn. — A first in McNairy County Wednesday as a group of men take a big step forward toward change. Wednesday morning, the McNairy County Jail held its first graduation for its fatherhood pilot program. “The sheriff said that I don’t have to come back and that really stuck with me,” inmate and graduate Joseph Lands said. Lands has been working toward this day since September. “It means the world. I mean without a second chance we’d be dead in the water we wouldn’t have a leg to stand on and this gives us an opportunity to be a better person to be a productive member of society,” Lands said. Lands is one of five inmates who make up the McNairy County Jail’s first graduating class of the ‘Inside Out Dad’ program. The program was established to help incarcerated fathers with parenting skills along with other resources and opportunities that will help them when they’re released. “It’s a curriculum to help them be better fathers, to help them be better husbands, to help them be better leaders of their families and be better in the workforce,” director Jimmy Bell said. Bell said each year 700,000 people are released from jails and prisons and within three years more than 2/3 are back behind bars. For some, jail is a time to rethink, refocus and make the necessary steps not to re-offend and that’s what the ‘Inside Out Dad’ program is designed to do. “Knowing that people care it helps out a lot. I mean it makes you want to strive to be a better person it’s a good thing,” Lands said. Lands has a 10-year-old daughter and said he has been in and out of jail six times, but with his new skills and resources, “this will be my last,” he said. Bell said in addition to helping the men be better dads they are now prepared to support their families. “They all have a resume now,” Bell said. They also now have a desire to leave a life of crime behind. The Southwest Human Resource Agency plans to implement the program in seven more West Tennessee County jails by July 1. In McNairy County, they will also begin a similar program for women in July.