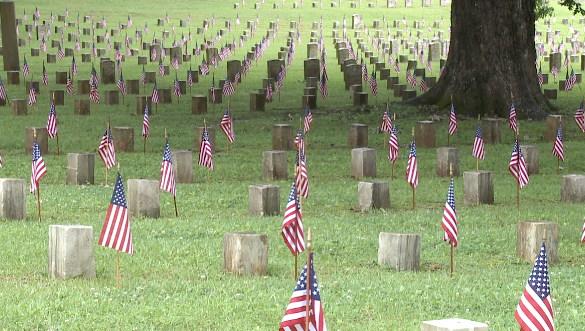 SHILOH, Tenn. — Despite a rainy start to Memorial Day, hundreds gathered Monday morning at Shiloh National Cemetery. The historic cemetery once was the scene of one of the bloodiest battles in Civil War history. “It’s really important I think as a nation that we remember those who paid the cost for our freedom,” Dale Wilkerson said. “We live in a nation that is just so special and has so many opportunities for people, and that didn’t come without a price.” More than 150 years ago, 110,000 men clashed at the Battle of Shiloh, and 24,000 of those men died. Now every Memorial Day it’s a place for Americans to come and pay their respects. “We offer this as a service for the American people to come out, pay their respects and honor those who died,” Wilkerson said. The national park also hosts a ceremony every year. This year’s ceremony had to be moved inside to the Shiloh Military Park Auditorium because of rain. The ceremony features military traditions as well as guest speakers. “It’s important to me because the people that died for our country, they used their own lives for us to be free,” Mae Watson said.