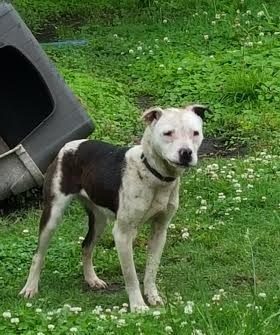 UNION CITY, Tenn. — Officers saved animals from what rescuers called a life or death situation. The police report stated when officers were originally called out to the home of Corey Williams last month, the dogs appeared healthy. When they returned for a followup last Wednesday, the canines were riddled with worms, infections and were underweight. They now are recovering at the city’s animal shelter. “I started crying, because I just knew I had waited too long,” said Laura Archer, the one to report the dogs to Animal Control. She said she’s relieved to see the two dogs saved. “It’s disheartening. It hurts deep,” Archer said. “They lay there, and they hope for somebody.” Archer, who founded her own rescue group, said she first saw them while passing through the neighborhood. She was shocked no one had called the authorities sooner. “There are people that walk the street. I know someone had to have seen them every day,” Archer said. Knox McFall owns a business right across the street from the home and said he never saw mistreatment of the animals. “Far as I know [the owner] took care of them. He takes them in the house and brings them outside,” McFall said. Officers said no one was home Friday when they came to pick up the dogs, but they did leave a citation for Williams on the door. Archer said more people need to be more alert to what is happening around them and not too afraid to report it. Veterinarians said the dogs are being treated and that they hope for a full recovery.