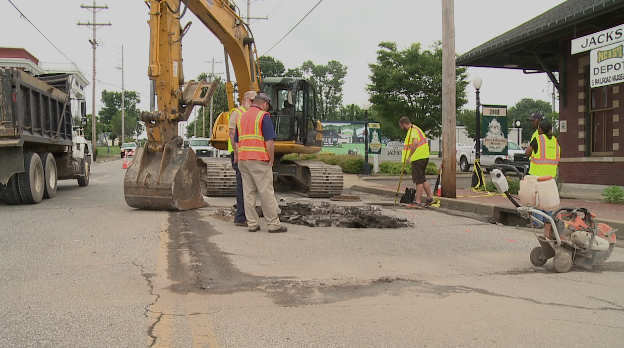 JACKSON, Tenn. — A busy street in downtown Jackson shut down Tuesday after the city said a collapsed pipe created a hole in the middle of the road. Crews worked Tuesday to repair the hole on South Royal Street. “A big washout and no telling how far it actually goes,” David Falk, who works nearby, said. Falk runs the nearby Nashville, Chattanooga & Saint Louis Depot & Railroad Museum. “I sat out here and I kind of watched it sink in and sink in and sink in,” he said. The hole underneath the street stretches several feet deep and wide. “Right now, we don’t know to the extent how much we’ll have to do,” Jackson City Engineer Scott Chandler said. Chandler could not say how much repairs will cost but estimates it will be in the thousands. “Anytime we have a collapse like this, it does run into some money,” he said. Drivers will have to take about a half-a-mile detour around the construction. Falk calls the situation a small inconvenience. “This is starting to be our busy time of the year, you know — school‘s out, vacations,” he said. “People from out of town — that‘s where most of our customers, our guests, come from — won‘t know to actually drive around, but I‘m sure they got signs so they‘ll figure it out.” Chandler expects repairs to take several days or more. The city said workers will have to patch or replace the pipe before repairing the road.