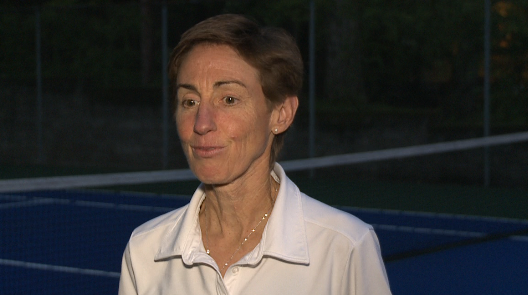 EAST JACKSON, Tenn. – Jackson native Fran Chandler knows the Timebrlake Estates’ tennis courts like the back of her hand. The Jackson Central Merry grad played there as a teenager, and now lives there with her husband, Willie. Those same courts Chandler sprinted back and forth on with her teenage friends added a bronze plaque on Tuesday naming the court “The Fran Chandler Court.” “I’m honored unbelievably to have this,” said a shocked Chandler, who just got off work. “It’s probably been 40 years ago I played on this court.” The Timberlake Estates surprised the former national champion with a ceremony. “Not any other community in Jackson can say that a world class tennis champion is in their community and plays on their court,” Timberlake Board of Directors Mimi Allen said. “We colored it in blue and green because those are USTA colors.” Allen added, “She’s a very humble person. She puts everything she got into playing tennis.” Chandlers’ playing days aren’t done. The former Ole Miss Female Athlete of the Year is heading to France on Thursday to play on the USA 50 and over team. “It’s kind of like a Davis Cup format to where you’ll play two singles and one double,” Chandler said. “There’s usually 16-20 countries and you’ll play round robin.” Chandler’s plaque being mounted on the fence at the court still hasn’t sunk in, but she did admit she will play on her court before she leaves Jackson. “Probably Thursday morning before I leave,” smiled Chandler. Chandler was inducted into the Jackson-Madison County Sports Hall of Fame in 1994 and in the Tennessee Sports Hall of Fame in 2007.