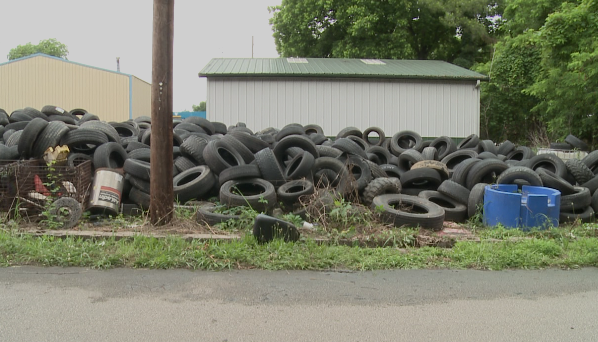 ALAMO, Tenn. — A pile of tires sparks controversy in Crockett County. People who live nearby want the property cleaned up. Tires and trash sit stacked up at the intersection of East Church Street and North Johnson Street in Alamo. Heather Mealer lives next door and wants the pile gone. “Not only does it look awful and it looks like a junkyard, but there’s children all on this block and they can’t even come out and play in the summer because they just get ate up with mosquitoes,” she said. The tires filled with standing water creating a breeding ground for mosquitoes. Kendra Ward said her son is covered in bites. “If my child is to get West Nile disease, it’ll be a big problem,” she said. Neighbors said they are also concerned about snakes and rats and contacted the Environmental Protection Agency and the mayor‘s office. “We don’t have a city ordinance against storing of used tires,” Alamo Mayor Tommy Green said. The property owner did not want to talk on camera. He said they started hauling off the tires this week, a process he said could take up to 60 days. Green said they asked the property owner several times over the last few years to get rid of the tires. “They’re ugly,” he said. “They don’t look good.” Mealer said they just want the property cleaned up and kept that way. “We’re just all tired of coming out and getting eat up and not letting our kids be able to come out and play,” she said.