As the famous saying goes, “one man’s trash is another man’s treasure.”

Thompson and her longtime friend, Carole Childers, volunteer to organize stuff. Their friendship began like any other. 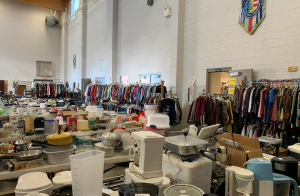 Student scholarships are the reason Thompson organizes rummage.  She and other volunteers price and sell the donated items in a giant rummage sale every April and October. In fact, in the last 10 years, they have raised more than $181,000 for Freed Hardeman University scholarship funds.

“We have more than doubled what we used to do,” said Thompson.

People donate items like kitchen appliances, home decor, jewelry, books and electronics during the sale at the National Guard Armory.

“She is a person that is a ‘stick to it and I’m going to get this done and it’s going to be done right,'” said Childers.