HUMBOLDT, Tenn. — An incredible sight at the Humboldt Golf and Country Club, where a small plane carrying two men came crashing to the ground. 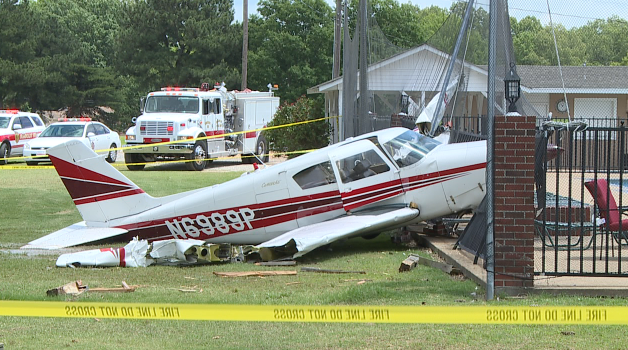 “You just didn’t get a chance to think about it. You really had to just react,” said Chloe Wilkes, who was a lifeguard at the pool at the time of the crash, along with her friend Audrey Reasons.

Reasons and Wilkes were on duty when they saw the plane approaching. The crash happened just before noon on Friday.

“I got over there, I said, ‘There’s a plane coming, get out of the pool’. I grabbed my phone and I called 911,” Wilkes said. “It seemed like it was coming a lot faster than it was. By the time it had hit the fence, it had slowed down some. I feel like when it landed, it kind of hit wrong. So it slowed down by the time it got to the fence.”

The plane knocked down a brick column when it hit the fence.

The cause of the crash is unknown at this time, but authorities at the scene said the Federal Aviation Administration was en route to investigate.

“It’s one of those moments where you’re like: Is this actually happening?” Wilkes said.

The pilot and the passenger of the plane were seen walking around, talking to investigators. Their names could not be confirmed at the scene.

According to the FAA website, the plane is registered to Seth Lockard of Lebanon, Tennessee.