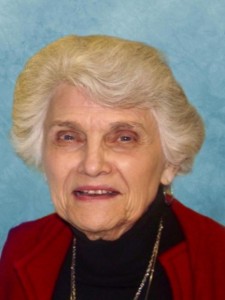 Marian Turner Stephenson, a long-time resident of Jackson, Tennessee and most recently Germantown, Tennessee, passed away on Saturday, the 25th of July at The Village at Germantown.

Born in Rome, Georgia on August 14, 1930 and raised in both Atlanta, Georgia and Memphis, Tennessee, Marian attended both Lambuth College and Memphis State University, where she received a Bachelor of Science in Elementary Education in 1952. She met her husband, Roy Crosby Stephenson at Lakeshore United Methodist Assembly in Eva, Tennessee, were married in 1950 in Memphis and spent 48 happy years together until Roy passed away in 1998.

Marian was a devoted member of Lambuth Memorial United Methodist Church, where she was a member of the Oxley Sunday School Class and United Methodist Women and was actively involved in Society of St. Stephen, UMCOR and Walk to Emmaus.

In lieu of flowers, memorial gifts may be made to the UMCOR – [ United Methodist Committee on Relief, Advance number 999895 (Where Most Needed) at https://advance.umcor.org/p-662-umcor-where-most-needed.aspx. Please send any e-card dedications to Kathypope1024@comcast.net ] or Lambuth Memorial United Methodist Church or the American Lung Association (https://action.lung.org/site/TR/Events/General?pg=fund&fr_id=1080&pxfid=159678).

There will be a private, graveside service for family members and close friends. The service will be led by Reverend Gary Morse, pastor at Lambuth Memorial United Methodist Church, at Hollywood Cemetery this Friday, July 31st at 1:30pm. We ask that anyone attending wear masks and practice social distancing. George A. Smith and Sons, North Chapel (731) 427-5555.