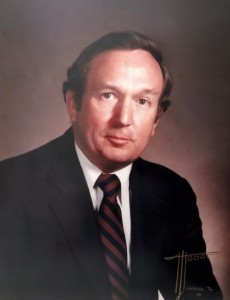 A native of Jackson, Thomas grew up in mid-town and was a 1950 graduate of Jackson High School, where he played football. His college years were split between the University of Mississippi, and Tennessee Technology Institute (Tennessee Tech). He served in the United States Army during the Korean conflict.

Thomas was a devoted son, husband, father and friend. He grew up on Forest Avenue, the son of Harrel and Mary Oliver. On June 8, 1963, he married the love of his life, Virginia Ruth Gillenwater. They raised three children, Tommy, Liza and Suzanne. He loved to play golf, particularly with his regular group at the Jackson Golf and Country Club. He also loved solving the world’s problems with his friends at Senator Carter’s Coffee Club. As the grandfather to eight grandchildren, he enjoyed watching them on the field, court or stage. He truly enjoyed a great scoop of ice cream with them.

Thomas worked as a manufacturers’ representative throughout the Southeast for various manufacturers in the gift industry. He made a career of traveling and making friends with every customer. Thomas was an original member of the Board of Directors of Murray Guard, Inc. where he proudly served for more than fifty years. He was an active member of the Jackson Golf and Country Club for over fifty years where he also served on the Board of Directors and the Golf Committee.

Thomas was a member of St. Luke’s Episcopal Church, where he served on the vestry and as an usher. He also was a member of All Saint’s Anglican Church. He was preceded in death by his parents, Harrel Lee Oliver and Mary McGill Oliver, his brothers Albert and David. He leaves behind his wife of 57 years, Ruth, son Thomas Lee, II (Denise) of Birmingham, Alabama, daughter Liza Gary (Chris) of Fayette, Alabama and daughter Suzanne Boyd of Jackson, Tennessee as well as eight grandchildren: Thomas Lee Oliver, III, Britney Oliver Barnes, Mattie McGill Boyd, Kalyn Boyd, JP Boyd, Clay Gary, Walt Gary and Miller Boyd.

Funeral arrangements for Thomas Oliver will be Saturday, August 1, 2020. A private interment will be held at St. Luke’s Episcopal Church. Visitation will be at All Saint’s Anglican Church, 212 McClellan Road, Jackson, Tennessee at 10 am followed by the funeral service at 11 am.