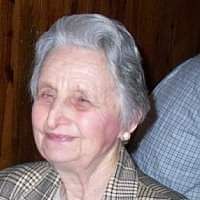 Helen was born December 17, 1932 in Hushpuckena, Mississippi, the daughter of the late Russell Brown Mathews and Mary Sue Howell Mathews. She graduated in 1950 from Red Bay High School in Alabama and attended the University of Alabama. She was married March 8, 1959 to Gordon Merrill Terry who preceded her in death on May 3, 2019 and had been a resident of Oakland since 1972. Helen was a member of Somerville First Baptist Church and enjoyed playing the handbells, canning, gardening and traveling. She will be remembered for being a loving wife, mother, sister, grandmother and great-grandmother.

In addition to her husband and parents, she was preceded in death by her sister, Susan Duquette Mayfield and two brothers, Will Mathews and Henry Mathews.

The family would like to express their appreciation to Brandi and Keisha at the National HealthCare Center, Mandy and Lisa with Crossroads Hospice and Susan Steel, her caregiver.