It’s been a warm start to the weekend, but Sunday will be much cooler thanks to the arrival of a cold front. That also means rain will be back in the picture. The forecast tonight calls for mostly cloudy conditions with temperatures staying in the mid 50s. The rain is expected to move into West Tennessee as early as 3 a.m. in our northern counties. 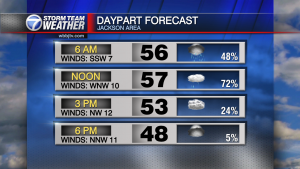 Later in the morning showers will be likely for all, but cold air will pool in behind the front quickly. Highs will struggle to even reach 60 degrees, with cooler temperatures north of Interstate 40. Because the cold front arrives earlier in the day, temperatures will actually be dropping gradually through the afternoon. The rain fortunately won’t be around long. It’s expected to taper off later in the afternoon.

High pressure slowly builds in late Sunday with the return of fair but cool conditions for Monday. Our next round of rain leading up to Thanksgiving will be for Tuesday night and much of Wednesday as a much stronger cold front pushes through.