HENDERSON COUNTY, Tenn. — A local law enforcement agency is working to help keep roads safer with the possibility of a snow storm this weekend. 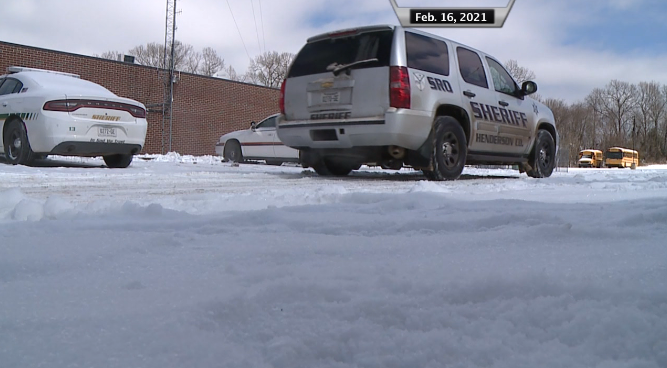 Duke says the sheriff’s department will be providing rides for the community to try and keep roads and people safer.

This service by the Henderson County Sheriff’s Department was offered last year, and they’re offering this year again.

“Last year we had pretty sizable snow, and people were having a lot of difficulty getting to work. People needed to be in certain places so they just kind of looked to us and said, ‘Can you help?’ And we decided, you know what? We’ll help,” said Henderson County Sheriff Brian Duke. “There’s just a lot of people that aren’t used to this kind of weather. It makes it difficult for them.”

Duke says the idea came from a former sheriff. He says this service will be available only in Henderson County.

“We’re basically confined to county boundaries. It is going to be too difficult to cross county lines to get people to work, and we don’t devote our entire staff to providing these rides,” Duke said.

He asks for one thing if you need a ride.

“To work or maybe to a dialysis appointment, something like that we ask that you wear a mask,” Duke said.

He also says these rides are a way to give back.

“It is something that we feel like we’re out anyway. We don’t have the choice of not being out, so if we’re already out here doing this and somebody needs our help, I just feel like we’re obligated to do it,” Duke said.

If you need a ride or if you know someone that could need a ride during the possible snow storm this weekend, call (731) 968-3307.