MARTIN, Tenn. — The Martin Police Department confirms one man was arrested following a shooting at MTD Products on Monday. 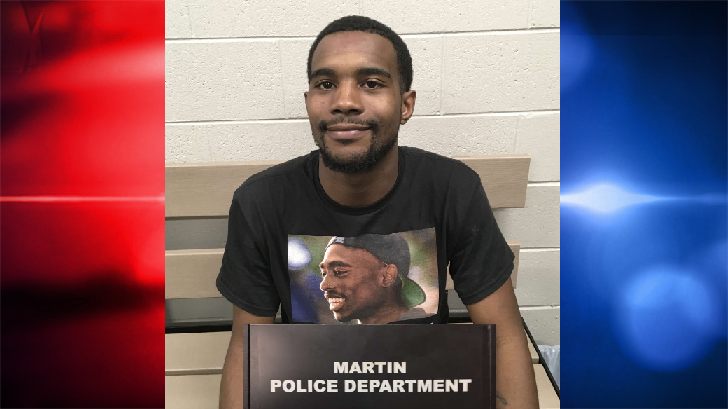 27-year-old Anthony Hogard was taken into custody after allegedly being involved in a shooting incident in the factory’s parking lot.

A police report states that officers responded to MTD around 12:25 p.m. on July 25 in reference to possible shots fired.

Upon arrival, an officer made contact with Hogard, who said he was walking to his vehicle when a man wearing a ski mask in the front passenger seat of a white Infiniti SUV asked him to come over to him.

Hogard stated that he ignored the man, and that the white SUV then blocked in his vehicle.

According to Hogard, the man opened the SUV’s door and fired 1-2 rounds at him. Hogard says he then grabbed his own firearm from his car, and fired approximately 2-3 shots back at the man.

Hogard stated the SUV left the property immediately after the exchange of gunfire.

An investigation revealed there were multiple employees walking through the parking lot on their scheduled break during the incident. A police report states that officers located two spent steel shell casings and one spent brass shell casing at the scene. Hogard’s firearm was secured at the scene and brought to the police department as evidence.

According to Martin Police Department Assistant Chief Phillip Fuqua, the other suspects involved have been identified as 23-year-old Kentrel Ne’Air Siner and 21-year-old Laci D. Benson, who are both believed to be from the Savannah area.

Siner has active warrants for aggravated assault and reckless endangerment involving the use of a deadly weapon, and Benson has an active warrant for criminal responsibility for facilitation of a felony.

Assistant Chief Fuqua states the department is working with several agencies in effort to serve the warrants.

Anyone with information that can assist the investigation can reach the Martin Police Department at (731) 587-5355.