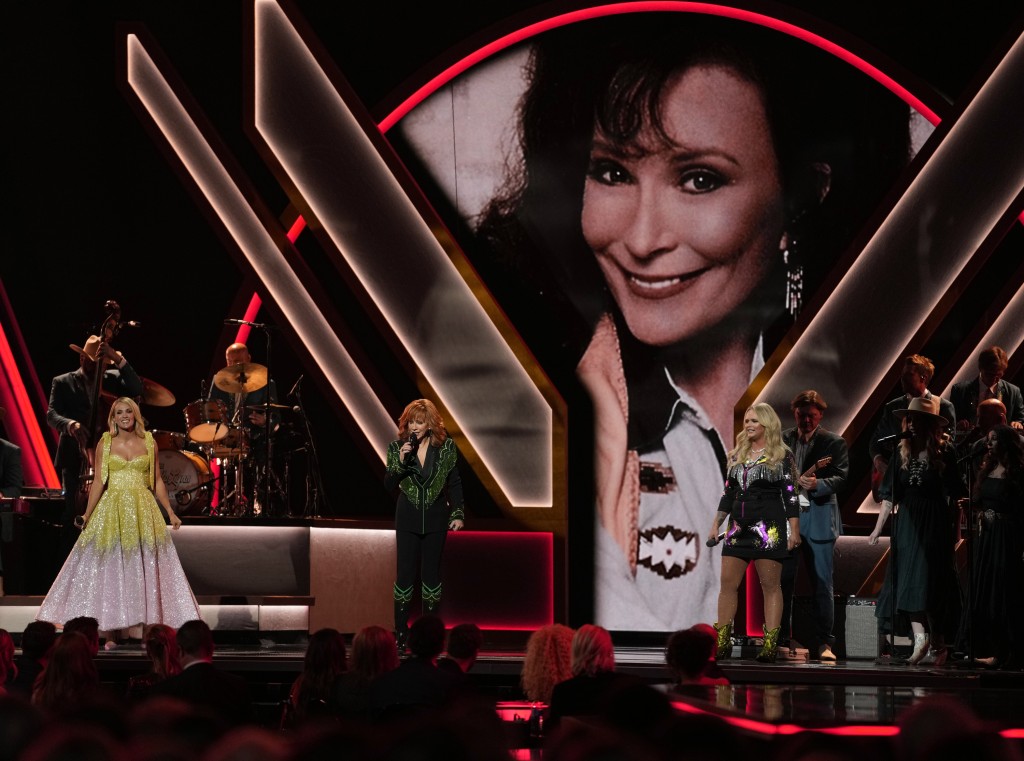 Carrie Underwood, from left, Reba McEntire and Miranda Lambert perform a tribute to the late singer Loretta Lynn, pictured on screen, during the 56th Annual CMA Awards on Wednesday, Nov. 9, 2022, at the Bridgestone Arena in Nashville, Tenn. (AP Photo/Mark Humphrey)

The superstar trio performed a medley of Lynn’s hits including “You Ain’t Woman Enough,” “Don’t Come Home A-Drinkin’” and “Coal Miner’s Daughter” as images of Lynn were projected behind them and audience members sang along.

Lainey Wilson was the leading nominee at Wednesday’s show and Alan Jackson will receive this year’s Lifetime Achievement Award. Wilson earned nominations in six categories, including female vocalist and album and song of the year.

Jordan Davis’ “Buy Dirt” won the night’s first honor, for song of the year. The song featured CMA Awards host Luke Bryan, who Davis called to the stage to hug.

Luke Combs won album of the year for “Growin’ Up,” while Brothers Osborne won vocal duo of the year and Old Dominion won the trophy for vocal group.

“All the guys in this category deserve this award,” Stapleton said.

He dedicated the honor to his 12-year-old daughter, who’s birthday was Wednesday.

Bryan is co-hosting the show at Bridgestone Arena along with NFL great Peyton Manning.

Joining country’s biggest stars for the evening are Katy Perry and actors Jessica Chastain and Michael Shannon, who are playing Tammy Wynette and George Jones in an upcoming Showtime limited series.

Perry took the stage and performed “Where We Started” with Thomas Rhett during the show.