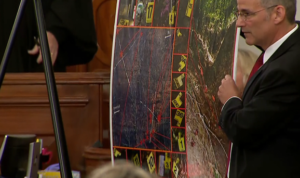 We do want to warn you the photos you see during the video may be disturbing.

HARDIN COUNTY, Tenn —  Day 3 of the trial for Zach Adams, one of the men accused of kidnapping, raping, and killing Decatur county nursing student Holly Bobo.

Several people who were a part of the search party testified Wednesday, but as day 3 of trial came to an end, new details emerged as DNA experts took a closer look at remains found back in 2014.

TBI Special Agent Laura Hodges showed the jury an aerial photo, along with closeups, of remains said to be holly Bobo found three years ago.

“That is a close up of Holly Bobo’s drivers license,” Hodges said.

Shortly after Hodges finished her testimony, the state called forensic pathologist Dr. Marco Ross to the stand. The remains were taken to Dr. Ross’s office for testing. During court state prosecutors showed photos of a skull, teeth, ribs and a shoulder blade. Ross said the teeth found at the scene match dental records of Holly Bobo.

As state prosecutors continued to examine photos, Dr. Ross brought up a ‘defect’ on the back right side of the skull. “The bone is beveled in an outward manor and that’s pretty typical for a gunshot entrance wound to create that pattern on the bone,” Ross said.

Experts said the cause of death was a gunshot wound to the back of the head and ruled it as a homicide. The defense argued that there is no scientific evidence to prove if the gunshot wound was received before or after death.

Defense Attorney, Jerry Gonzalez said, “The only thing you can definitively say is that there was tissue inside the skull at that time…and if an individual is shot in the head after they have already deceased you’ll get the same kind of fracture?” Ross said, “That is correct,”

One of the ribs was taken for a DNA analysis back in February of 2015. Senior Forensic Analyst, Krystle Rodriguez was able to obtain a profile from the rib after testing samples received from Karen, Dana and Clint Bobo in May of 2011.

“The DNA profile from this rib is basically the missing piece it completed the pedigree,” Rodriguez said.

Experts said the DNA samples go into a national database where all DNA profiles are entered for relatives of missing persons, and if a profile matches the lab is notified.

“When I looked at the profiles it is consistent with these remains belonging to a child of Karen and Dana Bobo and a sibling to Clint Bobo,” Rodriguez explained.

There was no cross examination from the defense as Rodriguez finished testifying. Court wrapped up early Wednesday and will resume Thursday at 9 a.m., beginning with testimony from a TBI agent.

The trial is expected to go into next week.