JACKSON, Tenn. — Today is the national day of service for the Daughters of the American Revolution. 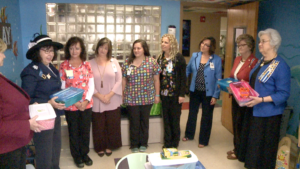 They gave 13 Jared’s boxes to the pediatrics wing filled with stuffed animals, colored pencils and books.

Beth Bates, Jackson-Madison chapter regent,  got the idea for the Jared’s boxes after one of their member’s children was hospitalized last year.

“I already have a warm feeling in my heart that we are doing something, we’re taking action to help others,” Bates said.

The Jackson-Madison chapter of the DAR was founded in 1901 and now has 140 members.