JACKSON, Tenn. — Expect more delays along the 45 Bypass and Interstate 40 this weekend in north Jackson. 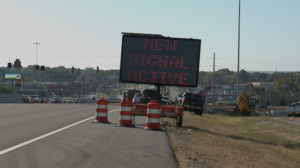 “I believe it’s a headache sometimes, sitting in traffic after a long day’s work,” Gibson Poole, a Jackson driver, said.

The Tennessee Department of Transportation said the north and southbound inside lanes of the 45 Bypass will close from Carriage House Drive to Vann Drive on Saturday and Sunday.

“One lane in each direction will be open just for the weekend so that they can get the ramps safely closed and the red lights turned on by Sunday afternoon,” TDOT Community Relations Officer Nichole Lawrence said.

Lawrence said the outside lane of I-40 westbound from mile marker 81 to mile marker 80 will also close this weekend. TDOT said workers will install a temporary barrier rail. “We want to widen the interstate from four lanes to six lanes, you know, Jackson is growing,” Lawrence said.

Lawrence encouraged drivers to slow down, be patient and give themselves extra time to get to destinations. “Look for an alternate route,” she said. “Look at leaving earlier or later.”

Poole said he thinks the delays now will be worth it in the end. “I just hope they hurry up and get it done,” he said.

TDOT said this weekend’s lane closures are part of an around $67 million project that will not be completed until June 2021.