We will slowly trend towards partly cloudy skies as a as a weak area of high pressure moves our way to start off the work week. Looking ahead, A strong upper level storm system will drop south along the Rockies around Monday night and approach the midsouth by Tuesday afternoon. Out ahead, we’ll see a return of strong southerly winds near the surface. Deep rich moisture will pump into the region through the day on Tuesday as the upper level system moves our way. Strong storms will start to develop to our west as early as Tuesday morning and approach the viewing area Tuesday afternoon to evening. We’ll be in tracking the storms so you’ll want to stay with StormTeam 7 ahead of this evolving storm system. *More Information On Timing Below* 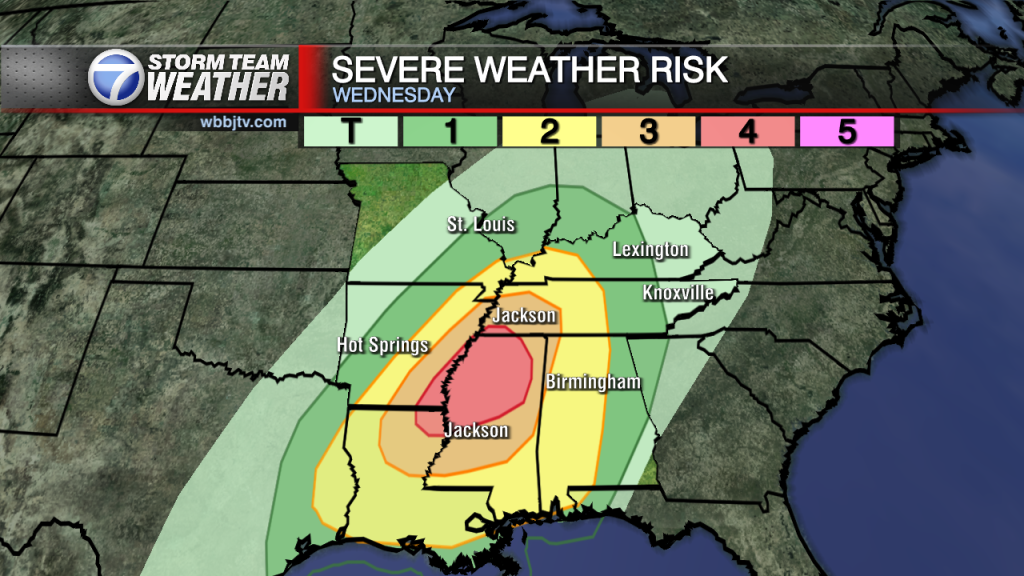 Skies should finally begin to look a little clearer as we head into Monday but some clouds will remain with us the first part of the day slowly becoming a sun/cloud mix in the afternoon with highs ranging from 56-59 degrees.

Partly cloudy with lows in the lower 40’s and light southwest winds. 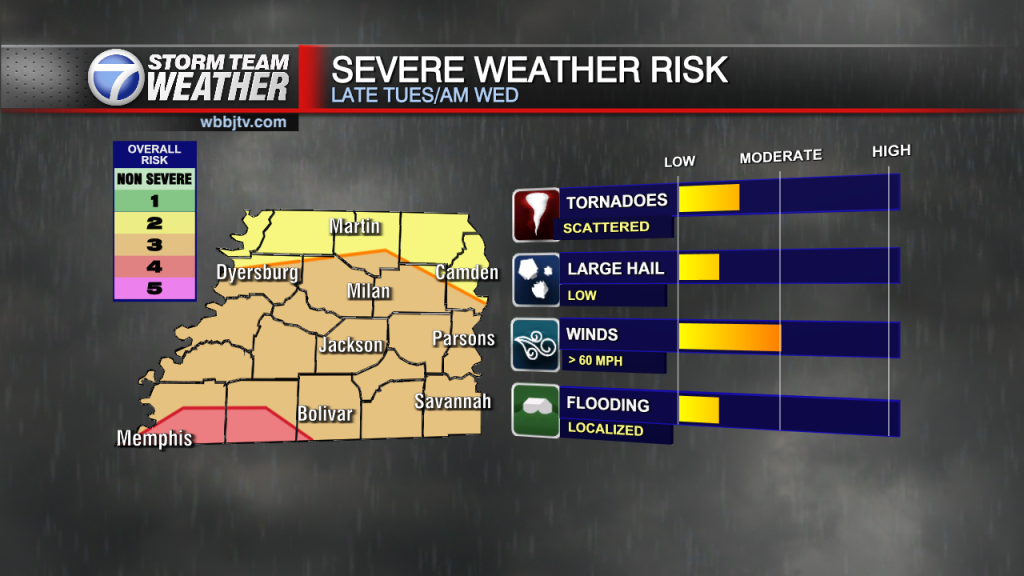 Clouds will increase on Tuesday with showers and thunderstorms possible in the afternoon and evening. Highs in the upper 60’s. Some storms could become severe in the evening with potential for damaging winds, frequent lightning, large hail, and isolated tornadoes.

*A majority of our area will be under a 3 out of 5 or “Enhanced Risk” with the southwest counties under a higher risk or “Moderate Risk” at a level 4 out of 5. Northern counties under a “Slight Risk” or 2 out of 5. All persons in the viewing area will need to remain weather aware Tuesday afternoon into Tuesday night.

Tuesday night looks stormy with near 100 percent chance of rain and storms. Some storms may be severe. Lows 44-46.

As of now models are starting to agree on a potential long duration event with potential severe storms as early as around Noon to 1 pm. Storms around this time could produce large hail. 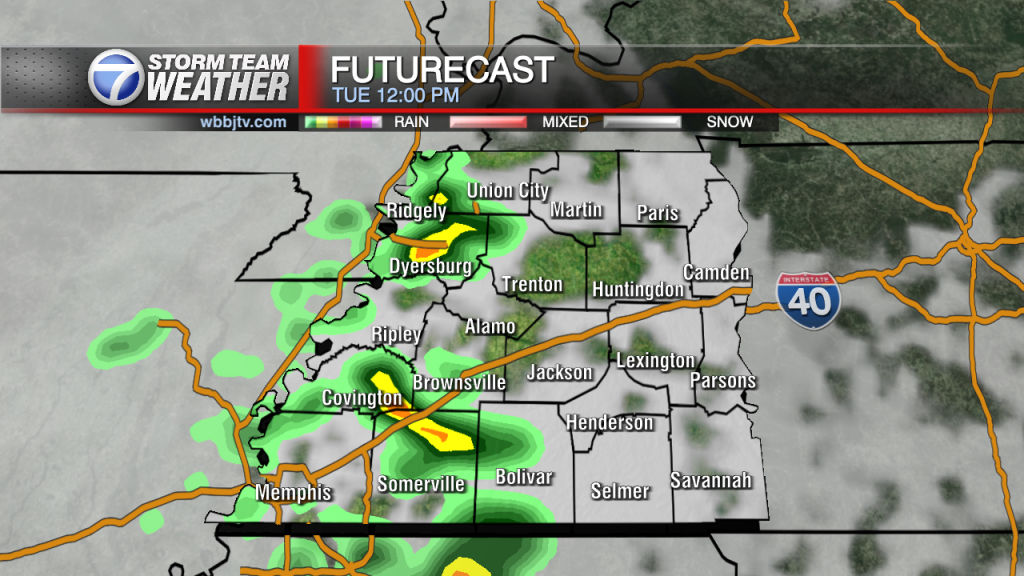 Storms will continue to get more widespread and concentrated over the area as we go into the afternoon. 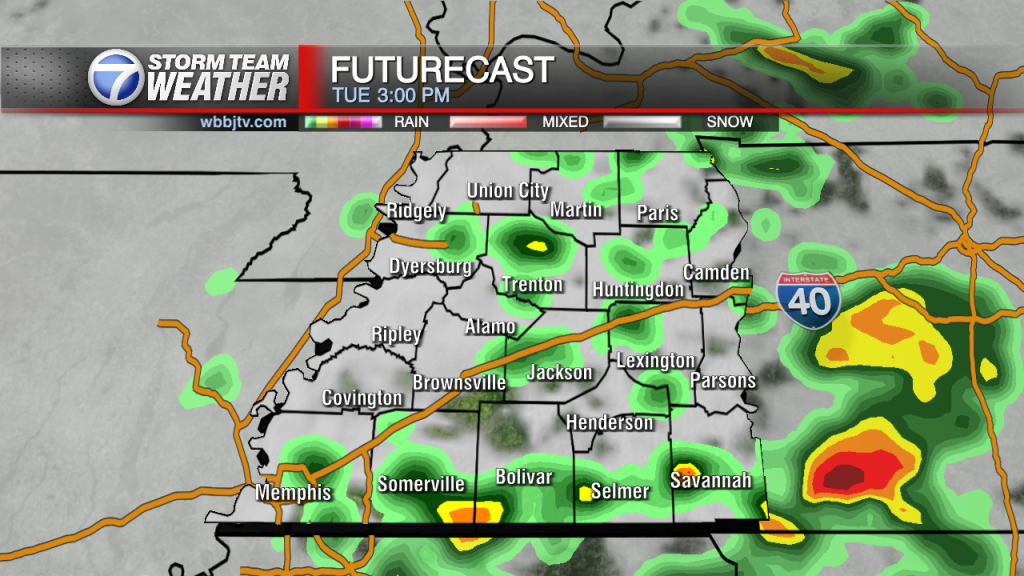 The tornado threat will mainly be for south of I-40 from around 3 pm through around 8 pm as the energy and ingredients enter more into the picture. 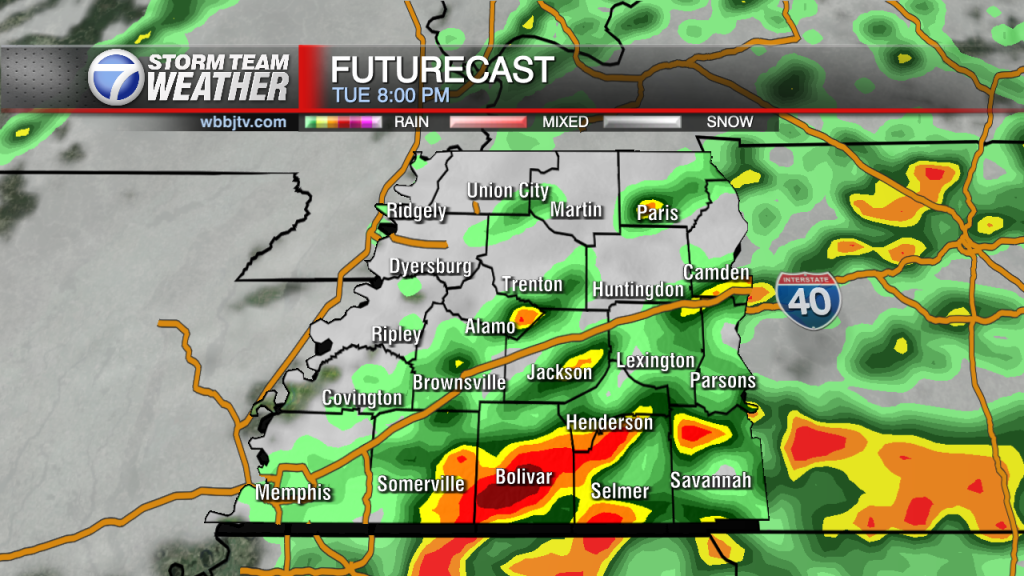 Futurecast continues to show a more linear event of straight line storms along the approaching cold front that will push through from around 8 pm and exit the area by around 1 am. Storms east and ahead of the cold front will still be capable of tornadoes followed by the potential for strong straight line winds late night. 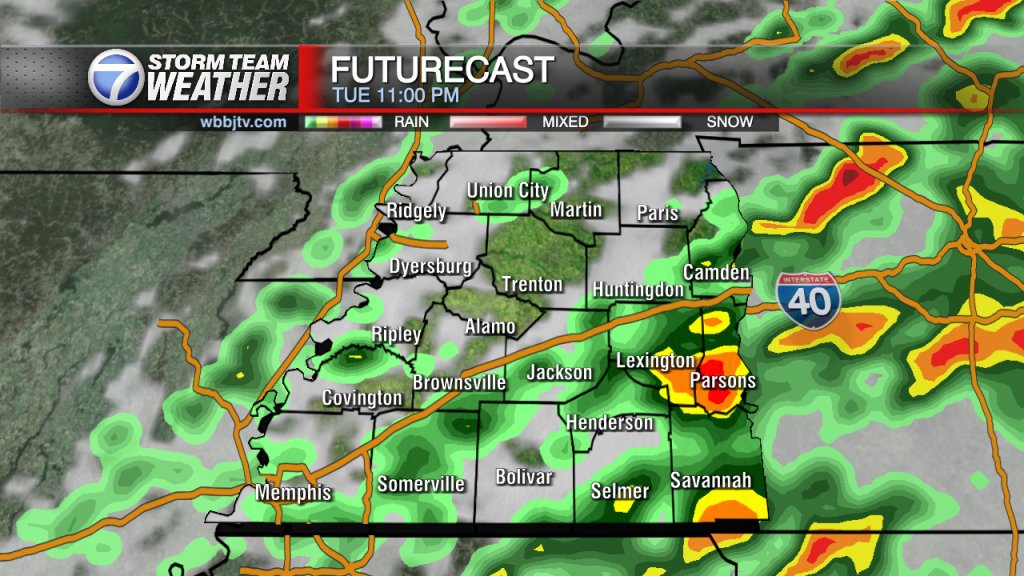 We will continue to try to narrow down better timing as we move into the future.

Mostly clear with lows in the lower to middle 20’s

Thursday looks dry and cool and clouds will return on Friday ahead of some scattered showers again next weekend.

You need to stay weather aware to changing weather patterns and monitor the forecasts closely this week especially ahead of Tuesday. We got you covered in the WBBJ 7 Storm Team Weather Center as always.